The Harbinger of Change (Book Two of Gleeman's Tales Duology)

The bard, Gnochi Gleeman is unlike other entertainers. Not only because he has an expansive knowledge of pre-apocalyptic Earth, but because he successfully assassinated Lyrinth’s ruling monarch. When he finally wakes from an accidental poisoning, a block that was put on his memory dissolves and he remembers burying his niece and sister after they died in a fire.

Cleo is traveling with Aarez, a ventriloquist from the entertainer’s guild. Their goal is to outrun the fallout of the assassination. By the time they arrive at a safehouse in the woods outside the small town of Mirr, the two learn that Gnochi has been imprisoned, awaiting execution.

The arrival of an eastern army off the coast of Lyrinth spurs Gnochi’s captors into transferring him away from the capital. When they learn of this movement, Cleo and her friends use the coming battle as an opportunity to rescue him from his impending execution. What they do not know is that Gnochi has already undergone life-changing torture designed to tear at the fabric of his identity, and a formal execution would only kill his physical body.

Complicating the plans of Cleo and her friends is the prolonged winter which has just begun its year-long reign. Dangers presented from the frozen-over oceans and endless storms of snow complicate the path and challenge the nerve of the young storyteller on her quest to save her teacher. 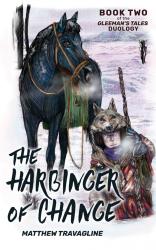