In our opinion, “The Essential Woodworker” is one of the best books on hand-tool usage written in the post-Charles Hayward era. Wearing was classically trained in England as a woodworker and embraced both power and hand tools in his shop and in his teaching.

He begins with a table. As you read the chapter on building a table, Wearing connects the dots for the hand-tool user by showing how all the tools are used in concert to produce accurate work. It’s not just about sawing a tenon or planing an edge. Instead, it is about how to gather these skills and apply them to building furniture – tables, doors, carcases, dovetailed drawers, plinths, etc.

The book is filled with more than 500 hand-drawn illustrations by Wearing that explain every operation in a hand-tool shop. His illustrations are properly drafted, drawn in perspective and masterfully clear.

"The Essential Woodworker" is printed in a 6" x 9" format, hardbound with a cloth cover, and produced entirely in the United States. Like our other books, this paper is acid-free, and the signatures are sewn and casebound. 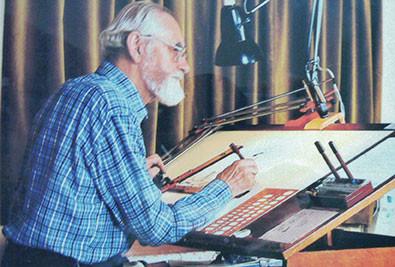 Acclaimed craftsman and woodworking instructor Robert Wearing was formally trained at Loughborough College (now University) in Leicestershire, England. It was there, during the late 1940s, that a physical education teacher said a sentence that Wearing has embraced throughout his long and fulfilling career: “For teacher and pupil, a lesson should be an enjoyable, purposeful activity.”

For Wearing, his childhood lessons in the building of things came from his father, a sailor, and a model construction kit.

Both sides of Robert Wearing’s family came from the south of the United Kingdom’s Lake district. “After WWI my parents married there, but jobs for young officers were hard to find,” Wearing says. “So my father, like the rest of his family went to sea.”

Wearing’s father sailed in Atlantic liners, first to New York and then later to Rio de Janeiro, a six-week voyage. Between trips his father would spend two weeks restocking for the next voyage. The family moved into a house vacated by a family member in the port of Liverpool. This way, when Wearing’s father was on land, he could take the tram home each night to be with the family.

“He was not a craftsman,” Wearing says. “I would call him a useful handyman with tools bought in New York.” Wearing’s father enjoyed building models and mechanical devices with “Meccano,” a model construction system created in their hometown of Liverpool by Frank Hornby. Wearing’s father taught his son how to solder. And while at sea, Wearing’s father would compile lists of parts to convert. “I think I owe a great deal to Meccano, which taught me the basic principles of design,” Wearing says.

Read more about Robert Wearing in this full profile.