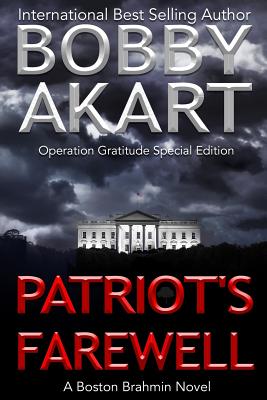 In politics, nothing happens by accident. If it happens, you can bet it was planned that way. FDRSixteen-time best selling thriller author, Bobby Akart, returns to the Boston Brahmin series with page-turning action and timely political intrigue seemingly ripped from today's current events in PATRIOT'S FAREWELL, a Boston Brahmin political thriller.After a devastating cyber attack brought America to its knees, a reluctant hero emerged. A humble professor whose lineage dated back to the American Revolution.Responding to the battle cry, CHOOSE FREEDOM, patriotic Americans rallied around their new president, Henry Winthrop Sargent IV - Sarge to his friends. As his administration worked to rebuild the nation, Sarge called upon his closest friends, the Loyal Nine, to use their skills and resources to assist him.The nation, except for four states which seceded after the collapse, stood behind Sarge and his administration during his first term which focused on rebuilding the country. But as his second term in office comes to an end, the nation is still divided and the drumbeats of war can be heard from the other side of the world. The Boston Brahmin, a shadowy group of wealthy and politically connected financiers whose roots date back to the Sons of Liberty, still look to Sarge as their leader, but storm clouds are brewing and Sarge will find himself in the crosshairs of a power struggle.Can Sarge bring a divided nation together before he leaves office? Can a rebuilding military face off against a major superpower? Will Sarge survive a betrayal from within The Boston Brahmin?Filled with non-stop action and political intrigue, Bobby Akart's return to the Boston Brahmin series with PATRIOT'S FAREWELL promises a fast-paced thrill ride which will leave you burning through the pages.Author's Note: Patriot's Farewell does not contain strong language. It is intended to entertain and inform audiences of all ages, including teen and young adults.MORE BOOKS FROM BOBBY AKARTTHE BOSTON BRAHMIN SERIES (A political thriller fiction series)The Loyal NineCyber AttackMartial LawFalse FlagThe Mechanics Choose FreedomBOSTON BRAHMIN POLITICAL THRILLERSPatriot's FarewellTHE PANDEMIC SERIES (A medical thriller post-apocalyptic survival series)BeginningsThe InnocentsLevel 6QuietusTHE BLACKOUT SERIES (An EMP post-apocalyptic survival series)36 HoursZero HourTurning PointShiloh RanchHornet's NestDevil's HomecomingPREPPING FOR TOMORROW SERIESEMP: Electromagnetic PulseCyber WarfareEconomic Collapse.