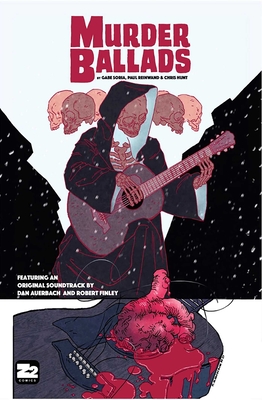 Murder Ballads is a truly unique package, AGraphic Novel with an an accompanying soundtrack by Dan Auerbach and RobertFinley. It deftly weaves the music into an narrative that is a meditation onmusic, race, obsession, and how far someone will go to see their vision becomereal, Murder Ballads follows the fall and reinvention of Nate Theodore, thedead-broke and deadbeat owner of a failed record label who is on a cross-countrydrive in the dead of winter with his wife Mary, fleeing the wreckage of theirbusiness and heading towards the destruction of their marriage. But Nate isgiven an unexpected chance to redeem himself when, during an unscheduled detour,he "discovers" Donny and Marvell Fontweathers,two African-American brothers who play a singular version of doom-laden countryblues. Convinced that the brothers arethe key to his salvation, Nate's desperate to make an album with the brothersbefore someone else finds out about them-but he needs money. Money he doesn'thave and can't get through any conventional means. So he persuades Donny andMarvell to join him in a crazy scheme: they'll undertake a minor crime spree toraise the funds needed to produce their record. Naturally, complications arisefor this wannabe modern-day Alan Lomax and his soon-to-be stars, and just likein the murder ballads the Fontweathers Brothers play, the body count starts togrow.. Music contributed by Dan Auerbach andRobert Finley."