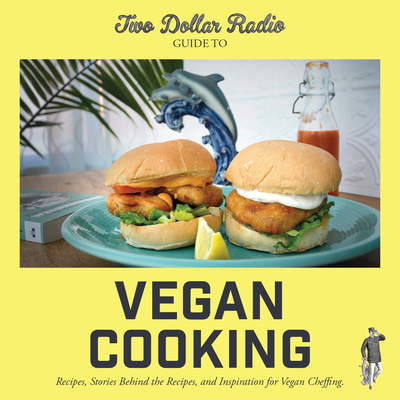 Two Dollar Radio Headquarters in Columbus, Ohio, has become a vegan comfort food mecca thanks to celebrity chefs Jean-Claude van Randy and Speed Dog (with constructive criticism from Eric Obenauf). In this Two Dollar Radio Guide to Vegan Cooking: The Yellow Edition, the executive vegan chefs unearth a fount of vegan-cheffing knowledge. In addition to exquisite recipes and vegan life hacks, they--like every long-winded blogger whose recipe posts you've had to extensively scroll through--view food as a story: nary a meal is prepared without recalling an epic adventure, such as when Speed Dog summited Old Goat Mountain in Banff, armed with nothing more than a sack full of cherry Ring Pops and a wily pack burro.

We are all explorers, vegan food explorers. Join us on this culinary journey--crafting delectable recipes and solving mysteries--as we slay Vegan Hunger Demons.

This Guide to Vegan Cooking is for you if:
* You're looking for satisfying comfort food;
* You're interested in a vegan diet but are having trouble giving up cheese;
* You're (vegan) fishing for accessible recipes that don't require hard-to-find ingredients you can't pronounce;
* You crave ADVENTURE.

One is not simply born a Jean-Claude; one must become a Jean-Claude. The title is earned. No, Jean-Claude van Randy was born with an unassuming name (Randall) in an unassuming city (Sheboygan, Wisconsin 53081). He had a bike with a kickstand and liked to race his friends from the cul-de-sac to the fancy, "uppity" stoplight of Lincoln Boulevard. He infrequently won. Randy has two embossed certificates that you can't touch above his mahogany desk in his executive chef's office at Two Dollar Radio Headquarters in Columbus, Ohio, and prefers you refer to his hair decisions as a Kentucky waterfall, not a mullet -- Jean-Claude van Damme never had to answer these questions.Speed Dog's the drummer in the band. He likes cherry Ring Pops, adventuring, and vegan cheffing. After his Aunt Louise asked him to write a column in her newspaper, the Lake Erie Weekly Herald, dishing on all things Cleveland, Geneva-on-the-Lake, and Upper Ashtabula, he became a syndicated food columnist.Eric Obenauf, creator of the Two Dollar Radio Guide to Vegan Cooking series, is the Editorial Director of acclaimed indie press Two Dollar Radio, which he founded with his wife, Eliza, in 2005. Eric was included in Publishers Weekly's "50 Under 40" list, spotlighting 50 individuals working in publishing under age 40 worth watching, and was one of five finalists in the magazine's 2016 "Star Watch" awards. At Two Dollar Radio Headquarters -- an indie bookstore, vegan cafe, bar, and performance space opened in 2017 in Columbus, Ohio -- Eric stocks the books and chefs it up in the kitchen. He enjoys camping, hiking, cooking, reading outside with a beer or two like a gentleman, and dad jokes.