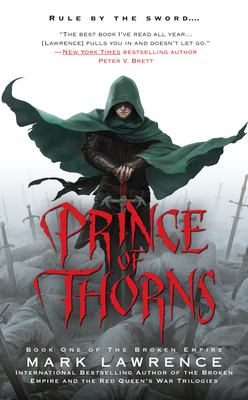 This is book number 1 in the The Broken Empire series.

BOOK ONE IN THE BROKEN EMPIRE TRILOGY

“Prince of Thorns deserves attention as the work of an iconoclast who seems determined to turn that familiar thing, Medievalesque Fantasy Trilogy, entirely on its head.”—Locus

When he was nine, he watched as his mother and brother were killed before him. By the time he was thirteen, he was the leader of a band of bloodthirsty thugs. By fifteen, he intends to be king...

It’s time for Prince Honorous Jorg Ancrath to return to the castle he turned his back on, to take what’s rightfully his. Since the day he hung pinned on the thorns of a briar patch and watched Count Renar’s men slaughter his mother and young brother, Jorg has been driven to vent his rage. Life and death are no more than a game to him—and he has nothing left to lose.

But treachery awaits him in his father’s castle. Treachery and dark magic. No matter how fierce his will, can one young man conquer enemies with power beyond his imagining?

Mark Lawrence is a research scientist working on artificial intelligence. He is a dual national with both British and American citizenship, and has held secret-level clearance with both governments. At one point, he was qualified to say, “This isn’t rocket science—oh wait, it actually is.” He is the author of the Broken Empire trilogy (Prince of Thorns, King of Thorns, and Emperor of Thorns), the Red Queen’s War trilogy (Prince of Fools, The Liar’s Key, and The Wheel of Osheim) and the Book of the Ancestor series (Red Sister).

“Prince of Thorns is the best book I’ve read all year...[Lawrence] pulls you in and doesn’t let go.”—Peter V. Brett, New York Times bestselling author of The Skull Throne

“This is a lean, cold knife-thrust of a novel, a revenge fantasy anchored on the compelling voice and savage purpose of its titular Prince. There is never a safe moment in Lawrence’s debut.”—Robert Redick, author of The River of Shadows

“Dark and relentless, the Prince of Thorns will pull you under and drown you in story. A two in the morning page turner.”—Robin Hobb, author of Assassin's Fate

“Without a doubt the most original and most memorable fantasy debut of 2011. It’s difficult to imagine how another book could top this one.”—RisingShadows.net

“2011 is turning into another year for impressive genre debuts, but at this point Prince of Thorns is arguably the most impressive and stunning...Highly recommended.”—SFFworld.com

“Defies the conventions of epic fantasy by invoking them only to take a savage delight in tearing them apart.”—Locus