Two For the Money (Paperback) 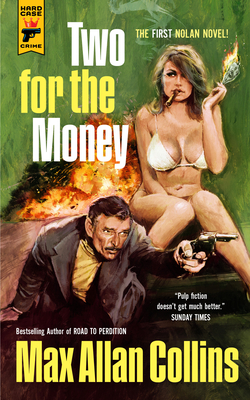 AFTER 16 YEARS ON THE RUN,
WOULD NOLAN BURY THE HATCHET WITH THE MOB...
OR WOULD THEY BURY HIM FIRST?

They don't come tougher than Nolan - but even a hardened professional thief can't fight off the entire Chicago mafia. So when an old friend offers to broker a truce, Nolan accepts the terms. All he has to do is pull off one last heist - and trust the Mob not to double cross him.

Fortunately, Nolan has a couple of things going for him: an uncanny knack for survival and an unmatched hunger for revenge...

Max Allan Collins was hailed in 2004 by Publisher's Weekly as "a new breed of writer." A frequent Mystery Writers of America nominee in both fiction and non-fiction categories, he has earned an unprecedented eighteen Private Eye Writers of America nominations, winning for his Nathan Heller novels, True Detective (1983) and Stolen Away (1991). In 2002, his graphic novel Road to Perdition was adapted into an Academy-Award winning film, starring Tom Hanks, Paul Newman, Jude Law and Daniel Craig. He lives in Iowa, USA.