The Book of Forgotten Authors (Paperback) 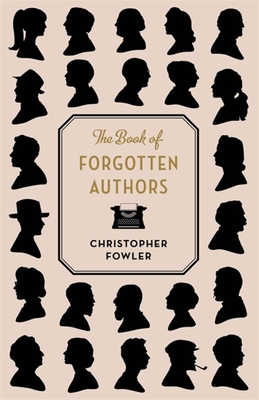 By Christopher Fowler
Email or call for price.
Hard to Find

'JOYOUS . . . READERS WILL LOVE THIS FASCINATING BOOK' CATHY RENTZENBRINK
'A GODSEND WITH THE PRESENT SEASON APPROACHING' IRISH INDEPENDENT
'THE PERFECT GIFT FOR A BOOK-OBSESSED FRIEND' STYLIST, 50 UNMISSABLE BOOKS FOR AUTUMN 2017
'EXCELLENT . . . SHOULD BE READ BY ANYONE WHO LOVES BOOKS' EVENING STANDARD

So begins Christopher Fowler's foray into the back catalogues and backstories of 99 authors who, once hugely popular, have all but disappeared from our shelves.

Whether male or female, domestic or international, flash-in-the-pan or prolific, mega-seller or prize-winner - no author, it seems, can ever be fully immune from the fate of being forgotten. And Fowler, as well as remembering their careers, lifts the lid on their lives, and why they often stopped writing or disappeared from the public eye.

These 99 journeys are punctuated by 12 short essays about faded once-favourites: including the now-vanished novels Walt Disney brought to the screen, the contemporary rivals of Sherlock Holmes and Agatha Christie who did not stand the test of time, and the women who introduced us to psychological suspense many decades before it conquered the world.

This is a book about books and their authors. It is for book lovers, and is written by one who could not be a more enthusiastic, enlightening and entertaining guide.

100. A typical example of the late 20th century midlist author, Christopher Fowler was born in the less attractive part of Greenwich in 1953, the son of a scientist and a legal secretary. He went to a London Guild school, Colfe's, where, avoiding rugby by hiding in the school library, he was able to begin plagiarising in earnest. He published his first novel, Roofworld, described as 'unclassifiable', while working as an advertising copywriter. He left to form The Creative Partnership, a company that changed the face of film marketing, and spent many years working in film, creating movie posters, tag lines, trailers and documentaries, using his friendship with Jude Law to get into nightclubs.
During this time Fowler achieved several pathetic schoolboy fantasies, releasing an appalling Christmas pop single, becoming a male model, posing as the villain in a Batman comic, creating a stage show, writing rubbish in Hollywood, running a night club, appearing in the Pan Books of Horror and standing in for James Bond.
Now the author of over forty novels and short story collections, including his award-winning memoir Paperboyand its sequel Film Freak, he writes the Bryant & May mystery novels, recording the adventures of two Golden Age detectives in modern-day London.
In 2015 he won the CWA Dagger In The Library award for his detective series, once described by his former publisher as 'unsaleable'.
Fowler is still alive and one day plans to realise his ambition to become a Forgotten Author himself.

Full of humour and pathos, Christopher Fowler's survey of authors who have fallen into obscurity is a bibliophile's dream.—Financial Times

Well researched and wide-ranging . . . The Book of Forgotten Authors is a bibliophile's treat written with verve and passion. It will have readers scurrying into secondhand bookshops in search of yellowing paperbacks.—Guardian

A real gem, filled with old favourites and new discoveries, and written in a light, snappy, erudite tone, as satisfying as a full English breakfast at your local art-house cafe.—Joanne Harris

A treasure trove of trivia . . . Excellent . . . This colourful compendium of literary lives should be read by anyone who loves books.—Evening Standard

A joyous saunter through the lives and words of yesterday's big names. Readers will love this fascinating book.—Cathy Rentzenbrink

A sure-fire Christmas gift . . . charged with an irresistible passion for the world of the book.—Daily Telegraph