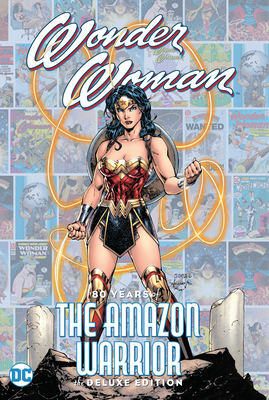 For 80 years Wonder Woman has stood as a symbol of truth, justice and equality to people everywhere!

But Diana's mission to keep peace in Man's World hasn't always been easy. Follow along in this incredible collection as the Amazon Warrior fights for justice! Starting from the first appearance of Wonder Woman through some of her most incredible battles against foes like the Cheetah and Ares, this is a can't-miss collection of Wonder Woman over the years!

George Pérez started drawing at the age of five and hasn't stopped since. Born on June 9, 1954, Pérez began his professional comics career as an assistant to Rich Buckler in 1973. After establishing himself as a penciller at Marvel Comics, Pérez came to DC in 1980, bringing his highly detailed art style to such titles as Justice League of America and Firestorm. After co-creating The New Teen Titans in 1980, Pérez and writer Marv Wolfman reunited for the landmark miniseries Crisis On Infinite Earths in 1985. In the aftermath of that universe-smashing event, Pérez revitalized Wonder Woman as the series' writer and artist, reestablishing her as one of DC's preeminent characters and bringing in some of the best sales the title has ever experienced. He has since gone on to illustrate celebrated runs on Marvel's The Avengers, CrossGen's Solus, and DC's The Brave and the Bold.

Phil Jimenez is one of the most talented artists in all of comics. Best known for his work on the bestselling miniseries, Inifinite Crisis—written by Geoff Johns—and Spider-Man, Jimenez's realistic and detailed art style brings the world of superheroes to life in a way that very few artists can capture. He is currently writing and illustrating Superwoman as a part of DC Rebirth.