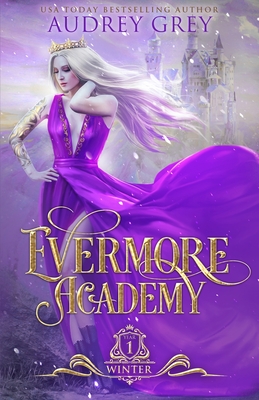 Welcome to Evermore Academy where the magic is dark, the immortals are beautiful, and being human SUCKS.

After spending my entire life avoiding the creatures that murdered my parents, one stupid mistake binds me to them for four years.

My penance? Become a human shadow at the infamous Evermore Academy, finishing school for the Seelie and Unseelie Fae courts.

All I want is to keep a low profile, but day one, I make an enemy of the most powerful Fae in the academy.

The Winter Prince is arrogant, cruel, and apparently also my Fae keeper. Meaning I'm in for months of torture.

But it only gets worse. Something dark and terrible looms over the academy. Humans are dying, ancient vendettas are resurfacing, and the courts are more bloodthirsty than ever.

What can one mortal girl do in a world full of gorgeous monsters?

Fight back with everything I have--and try not to fall in love in the process.

If you love reading about fated mates, enemies-to-lovers, snarky heroines, and everything Fae, then one click today and fall into this magical new series that's being called Vampire Academy meets The Cruel Prince

P.S. This full-length story may leave you with a book hangover.
P.P.S. This Upper YA/NA series will eventually be four books and is intended for mature audiences. It contains cursing, sexual situations, and violence.