The Girls in the Stilt House: A Novel (Hardcover) 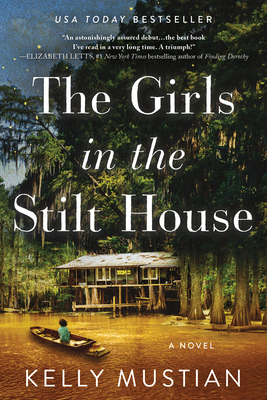 Set in 1920s Mississippi, this debut Southern novel weaves a beautiful and harrowing story of two teenage girls cast in an unlikely partnership through murder—perfect for readers of Where the Crawdads Sing and If the Creek Don't Rise.

Ada promised herself she would never go back to the Trace, to her hard life on the swamp and her harsh father. But now, after running away to Baton Rouge and briefly knowing a different kind of life, she finds herself with nowhere to go but back home. And she knows there will be a price to pay with her father.

Matilda, daughter of a sharecropper, is from the other side of the Trace. Doing what she can to protect her family from the whims and demands of some particularly callous locals is an ongoing struggle. She forms a plan to go north, to pack up the secrets she's holding about her life in the South and hang them on the line for all to see in Ohio.

KELLY MUSTIAN is the author of The Girls in the Stilt House, which Publishers Weekly calls "a remarkable debut" and "a nearly flawless tale of loss, perseverance, and redemption." Her work has appeared in numerous literary journals and commercial magazines, and she is a past recipient of a Blumenthal Writers Award and a Regional Artist Grant from the North Carolina Arts and Science Council. She is originally from Natchez, Mississippi, and currently lives near the foothills of the Blue Ridge Mountains in North Carolina.

"The two young women at the heart of this rich debut come of age under the hardest of circumstances, and Kelly Mustian has given us their world entire. We ache for their sorrows, we cheer for their victories, and we recognize both ourselves and our nation in their troubles and their hopes." — Jon Clinch, author of Marley and Finn

"Kelly Mustian’s THE GIRLS IN THE STILT HOUSE is a triumph, a heartbreaking and ultimately uplifting debut that’s as rich and lush as the Natchez Trace where the story takes place. Mustian’s lyrical prose combined with her deep insight into the resiliency of the human spirit make this novel shine. You know a book is good when you wish you’d written it!" — Karen Dionne, international bestselling author of The Marsh King’s Daughter

"In a world too cruel to make a place for them, Matilda and Ada become an army of two, fighting a war for their own refuge. This is a gripping novel about friendship, danger, isolation, and the vivid, dripping, moving landscape of a Mississippi swamp. If you loved Where the Crawdads Sing, you’ll love The Girls in the Stilt House." — Nina de Gramont, author of The Last September

"An astonishingly assured debut, The Girls in the Stilt House draws you in, holds you spellbound, and will move you to tears. With emotional impact and gut-wrenching power, this unforgettable novel is the best book I’ve read in a very long time, and I’m sure I won’t be the only one who thinks so. A triumph!" — Elizabeth Letts, #1 New York Times bestselling author of Finding Dorothy

"In prose that is stunning and assured, Kelly Mustian forges a powerful story of two young women, thrust together after unspeakable loss and devastation, and their courageous struggle to emerge from their darkest hours." — Jessica Keener, author of Strangers in Budapest, an Indie Next pick and Entertainment Weekly "best new book"

"The Girls in the Stilt House is a brilliantly researched, atmospheric page-turner. But best of all, it’s populated with characters you really care about. I devoured it in a single weekend, yet the novel’s haunting spell remained with me long after." — Kate Moore, New York Times bestselling author of The Radium Girls and the upcoming The Woman They Could Not Silence