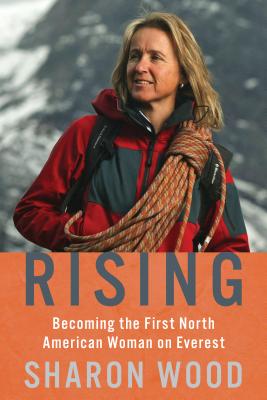 2019 Banff Mountain Book Competition Category Finalist in Mountain Literature On May 20, 1986, high on Mount Everest, Sharon Wood was ready to give up. Snow plumes swirled off the summit ridge and spilled down the North Face, engulfing her. A four-hundred-foot high rock wall, the crux of the Hornbein Couloir, loomed above--impossible. Then Wood's partner, Dwayne Congdon, handed her the end of the rope and said, "your lead." Hours later, at the far too late hour of 9:00 p.m., Wood became the first North American woman to reach the summit, and the first woman in the world to do so via the difficult West Ridge. Their ascent of the West Ridge by a new variation, without Sherpa assistance, is an accomplishment that has never been repeated. In Rising, Wood reflects on the seventy days she spent on the mountain and on the pivotal experiences and influences that brought her to that staggeringly beautiful and austere corner of the world. Beyond the physical hardships, she faced personal challenges as an outlier in the male bastion of Himalayan climbing. These were compounded by the vexing presence of her past mentor and lover with his new girlfriend on the American team climbing on the same side of the mountain. It didn't help that the media pitched the two women as rivals, both vying to become the first North American woman to reach the summit of the highest mountain in the world. Wood rose to all these challenges, finding camaraderie and inspiration among her teammates, particularly in the expedition cook, a strong woman whose perspectives were essential to the team's remarkable esprit de corps, as well as with "the other woman," her so-called American rival. Rising is both a gripping, adrenalin-filled mountain story and a reflective memoir that reaches beyond the summit to explore a life lived in Everest's long shadow: unexpected acclaim, outrageous expectations, and personal struggles. As Wood tells her story today, her perspective is steeped in six decades of life experience rich with adventure, change, growth, and humility. It is a tale that feels poignantly relevant--a testament to the strength of the human spirit to overcome all obstacles, whether mountain peaks, social expectations, or self-imposed barriers.--Jayme Moye "Outside.