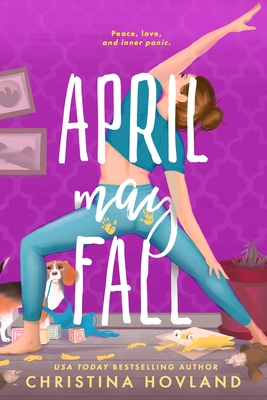 This is book number 3 in the Mommy Wars series.

The hilarious new stand-alone romantic comedy perfect for any mom who’s tried to have it all.

“I don’t think I have laughed out loud so much at a book while at the same time - felt so emotionally connected to the characters.” -This Book, That Life

April Davis totally has her life in order. Ha! Not really. Yes, she’s the Calm Mom—a social influencer with a reputation for showing moms how to stay calm and collected through yoga—but behind the scenes, she’s barely holding it all together. Raising tiny humans alone is exhausting, but that’s just the chewed-up cherry on the melted sundae of her life. Her kids aren’t behaving, her husband left her for his skydiving instructor, and her top knot proves she hasn’t showered in days.

Then a live video of the “always calm” April goes viral...and she’s most definitely not. Enter Jack Gibson, April’s contact at the media conglomerate that has purchased April’s brand. The too-sexy-for-his-own-good Jack will help clean up April’s viral mess, and even work with her to expand her influence, but toddler tea parties and a dog with a penchant for peeing on his shoes were definitely not part of the deal.

Now April’s calm has jumped ship quicker than her kids running from their vegetables. Not to mention, the sparks flying between her and Jack have her completely out of her depth. Forget finding her calm—April’s going to need a boatload of margaritas just to find her way back to herself again.

Each book in the Mommy Wars series is STANDALONE:

* Rachel, Out of Office
* There's Something About Molly
* April May Fall
* Everything’s Fine, Emmaline

USA Today bestselling author Christina Hovland is an artisan chocolatier by day and fiction writer by night. Before opening her chocolate company, Christina's career spanned from the television newsroom to managing an award-winning public relations firm. She lives in Colorado with her husband, four children, and the sweetest dog around. christinahovland.com