Inseparable: The Original Siamese Twins and Their Rendezvous with American History (Paperback) 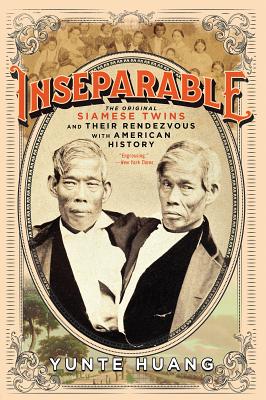 “An astonishing story, by turns ghastly, hilarious, unnerving, and moving.”—Stephen Greenblatt, author of The Rise and Fall of Adam and Eve

In this “excellent” portrait of America’s famed nineteenth-century Siamese twins, celebrated biographer Yunte Huang discovers in the conjoined lives of Chang and Eng Bunker (1811–1874) a trenchant “comment on the times in which we live” (Wall Street Journal). “Uncovering ironies, paradoxes and examples of how Chang and Eng subverted what Leslie Fiedler called ‘the tyranny of the normal’ ” (BBC), Huang depicts the twins’ implausible route to assimilation after their “discovery” in Siam by a British merchant in 1824 and arrival in Boston as sideshow curiosities in 1829. Their climb from subhuman, freak-show celebrities to rich, southern gentry who profited from entertaining the Jacksonian mobs; their marriage to two white sisters, resulting in twenty-one children; and their owning of slaves, is here not just another sensational biography but an “extraordinary” (New York Times), Hawthorne-like excavation of America’s historical penchant for tyrannizing the other—a tradition that, as Huang reveals, becomes inseparable from American history itself.

Yunte Huang is a Guggenheim Fellow and a professor of English at the University of California, Santa Barbara. He is the author of Transpacific Imaginations and Charlie Chan, which won the 2011 Edgar Award and was a finalist for the 2010 National Book Critics Circle Award in Biography. Having come of age in China as a student in the time of Tiananmen, Huang now lives in Santa Barbara, California.

In the follow-up to his Edgar Award-winning Charlie Chan biography, Huang uncovers ironies, paradoxes and examples of how Chang and Eng subverted what Leslie Fiedler called ‘the tyranny of the normal.
— Jane Ciabattari

Excellent.... Mr. Huang compellingly makes his case that racism was a factor in these two self-made gentlemen land owners still being considered, late in life, as nothing more than a Barnumesque “freak show”.... It’s not difficult to find in this, as Mr. Huang most definitely does, a comment on the times in which we live.
— Melanie Benjamin

Engrossing.... give[s] an unvarnished look at the degradation and disparagement the brothers had to endure.
— Jennifer Szalai

Chang and Eng waltzed, arm and arm, indivisible, across a brutally divided America. Huang's spellbinding account tells their story with a complexity, and sensitivity, with which it has never been told before.
— Jill Lepore, author of The Secret History of Wonder Woman

Inseparable, Yunte Huang’s exuberant and vivid account of the 'original Siamese twins,' examines 19th century American attitudes toward race and sex that resonate today — a time when immigrants, people of color, those with disabilities and others are denied their stories and denied their humanity.... By sharing his own experiences, [Yuang] reveals the poignant commonalities of immigrants across time and place, strangers making sense of a strange land, determined to make a better life for themselves and their children.

Inseparable tells an astonishing story, by turns ghastly, hilarious, unnerving, and moving. Huang is a dazzling writer, bold, energetic, and intellectually alert. His gripping account of the lives of the celebrated Siamese twins Cheng and Eng not only richly illuminates the past of P.T. Barnum and Mark Twain but also probes the racial and sexual politics of the present.

— Stephen Greenblatt, author of The Rise and Fall of Adam and Eve

Many of the subjects are timely today, such as the racial injustices the twins faced as Asian immigrants, often doubly worse for them due to their conjoined state.... Inseparable is an engaging look at the lives of two singular people.


Moving, wise, and wide-ranging, Inseparable is the poignant story of what it means to live in a diverse culture that strains after uniformity. As in Charlie Chan, Yunte Huang has once again found a perfect subject -- perfectly commensurate with his sympathy for American history and the American compulsion to stereotype that which it fails to understand. And so elegantly written, it's impossible to put down.

Excellent.... a complex literary history that mirrors the global story of meetings between east and west. Huang knows the treacherous racial terrain behind the meetings of facts and fictions in American culture [and] the place of “race” in every rendezvous with American history. Learned and playful, Inseparable draws on Huang’s personal experiences and his astonishing literary and historical knowledge.