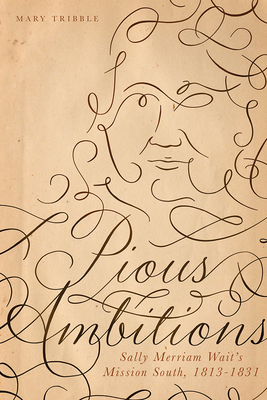 In 1812 at the age of nineteen, Sally Merriam Wait experienced her conversion. For those raised in an evangelical church during the religious fervor of the Second Great Awakening, conversion represented a key moment in a young person’s life, marking the transition from childhood and frivolity to the duties of a pious life. Sally’s conversion also marked the beginning of her journal.

Wait grew up in a New England swept with revival. Her letters reveal a northernborn woman with anti-slavery leanings engaging with an unfamiliar environment in the slave-holding South; she comes to embrace the principles of a market economy in Jacksonian America, while attending to her developing religious faith. Her decisions are shaped by a surging evangelical movement, changes in the American economy, the rise of women’s social agency, a fracturing of political traditions, and the moral conflicts inherent in a slave economy. At its simplest, Sally’s life is the tale of a nineteenth-century woman endeavoring to make her mark on the world while striving to develop her faith.

Pious Ambitions establishes Sally Merriam Wait as a significant figure in North Carolina and Baptist history. Her ambition led her from young convert to devoted wife of Reverend Samuel Wait, the first president and founder of Wake Forest University. Her journal was passed down carefully from generation to generation until it found its way in 1993 to the Special Collections and Archives at Z. Smith Reynolds Library at Wake Forest University in Winston-Salem, North Carolina, along with a large cache of letters and other documents. In examining this trove and reconstructing the life of Wait, Mary Tribble provides a rare glimpse into the spiritual education of a young woman who nevertheless successfully navigated the rise of capitalism in the market economy of the early nineteenth century.

MARY TRIBBLE is a senior advisor for engagement strategies at Wake Forest University.

"Pious Ambitions is a judicious, readable, and timely book in every way. What a pleasure to meet a latter-day heroine whose faith and heady portion of ambition left a legacy for a university and our region."—Edwin G. Wilson, Wake Forest provost emeritus and professor of English

"With elegance and empathy, Mary C. Tribble takes us along on Sally Merriam Wait’s fascinating and at times heart-wrenching quest to be a devout Baptist woman and the wife of a domestic missionary minister from the 1810s to the 1830s. She and her husband, Samuel Wait, stood up for the missionary impulse in the Baptist church, first in her native state of Vermont and then in North Carolina, where these transplanted New Englanders promoted the emerging Baptist State Convention and helped found what became Wake Forest University. Along the way, they shed their opposition to slavery as their denomination became more divided between the North and the South. Tribble draws from diaries and abundant letters that allow us to witness Sally Wait’s inner struggles alongside the events of her life. The result is a compelling and important life story."—Randal Hall, William P. Hobby Professor of American History, Rice University


"In this elegantly written and engaging cultural biography, we learn how young Sally Merriam Wait’s evangelical conversion in New England sent her on a south bound search for more voice and opportunity at the end of the Early Republic. This beguiling Baptist minister’s wife who once dreamed of serving as a missionary in Burma, fought against gendered inequalities and constraints, but too often to no avail, serving instead as exemplary helpmeet to her husband’s quest for opportunity and status. Tribble handles the complexities and disappointments of Wait’s transformation into a slaveholding North Carolinian with clarity and honesty."—Michele Gillespie, Presidential Endowed Chair of Southern History, Wake Forest University


“Ambition can propel us to achieve our highest aspirations. It can also blind us to injustices in our society and world. With deft insight and critical compassion Mary Tribble’s Pious Ambitions: Sally Merriam Wait’s Mission South, 1813-1831 troubles the smooth texture of Sally Wait’s writings in revealing the complex and, at times, competing aims at work in her life and world.”—Corey D. B. Walker, Professor of the Humanities, Wake Forest University

“From a riveting New England conversion-tale to a harrowing and hopeful backwoods North Carolina journey, Pious Ambitions stands among the handful of works that bring the early nineteenth century U.S. vividly to life. Replete with fascinating details about Sally Merriam Wait's world--her and surrounding figures' passions, torments, sorrows, and joys--this beautifully-crafted study is an instant classic in the fields of historiography and gender studies alike."—Rogan Kersh, Provost and Professor of Politics International Affairs, Wake Forest University

“The story of Sally Merriam Wait provides a productive prism to unpack the cultural pressures, political developments, and religious piety of a fracturing evangelical movement in 19th century America. Pious Ambitions captures the complex contours of this hyper-gendered and racially stratified world that continues to shape our contemporary context.”—Jonathan Lee Walton, Dean of the School of Divinity and Presidential Chair in Religion Society, Wake Forest University

“Pious Ambitions is a vivid and valuable study of Baptist culture in the early republic. The story does a wonderful job of capturing the balancing of submission and ambition among evangelical women.”—Christine Heyrman, Robert W. and Shirley P. Grimble Professor of American History

“Mary Tribble's fascinating study of Sally Merriam Wait gives voice to a remarkable 19th century woman as she encountered her times. Using journals and correspondence not previously studied, Tribble demonstrates how Wait becomes a case study in the way in which one Baptist woman appropriated and advocated for revivalistic spirituality, missionary imperatives, and the need for educational institutions in the American South. Sally Wait's long neglected story needed to be told."—Bill Leonard, Dunn Professor of Baptist Studies and Church History Emeritus, Wake Forest University