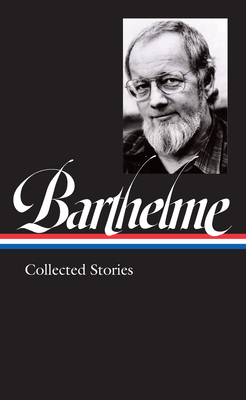 The definitive collection of a twentieth-century master of the short story, whose unforgettable inventions revolutionized the form

The short stories of Donald Barthelme, revered by the likes of Thomas Pynchon and George Saunders, are gems of invention and pathos that have dazzled and delighted readers since the 1960s. Here, for the first time, these essential stories are preserved as they were published in Barthelme's original collections, beginning with Come Back, Dr. Caligari (1964), a book that made a generation of readers sit up and take notice. Collected Stories also includes the work that appeared for the first time in Barthelme's two retrospective anthologies, Sixty and Forty, as well as a selection of uncollected stories.

Discover, in this comprehensive gathering, Barthelme's unique approach to fiction, his upside-down worlds that are nonetheless grounded in fundamental human truths, his scrambled visions of history that yield unexpected insights, and his genius for dialogue, parody, and collage, which was for him "the central principle of all art in the twentieth century." Engage with sophisticated works of fiction that, often in just the space of a few pages, wrest profundities out of what might first seem merely ephemeral, even trivial. And experience, along with Barthelme's imaginative and frequently subversive ideas, the pleasures of a consummate stylist whose sentences are worth marveling at and savoring.

Introduced with a sharp and discerning essay by editor Charles McGrath and annotation that clarifies Barthelme's freewheeling, wide-ranging allusions, the landmark volume is a desert-island edition for fans and the ideal introduction to new readers eager to find out why, as Dave Eggers writes, Barthelme's "every sentence ... makes me want to stop and write something of my own. He fires all of my synapses and connects them in new ways."

Donald Barthelme (1931-1989) was the author of seven story collections and the selected editions Sixty Stories and Forty Stories. He also wrote novels, a book of parodies, and a children's book that was awarded the National Book Award. A recipient of the PEN/Faulkner Award for his short stories, he was also founder and director of the Creative Writing Program at the University of Houston.