Sunday Afternoon on the Porch: Reflections of a Small Town in Iowa, 1939-1942 (Bur Oak Book) (Hardcover) 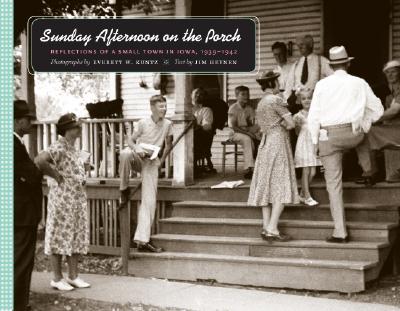 In 1939, just before graduating from high school in the small town of Ridgeway in northeast Iowa, Everett Kuntz spent his entire savings of $12.50 on a 35mm Argus AF camera. He made a camera case from a worn-out boot, scraps from a tin can, and a clasp from his mother’s purse. For the next several years, especially during the summers when he worked on his parents’ dairy farm, he clicked the shutter of his trusty Argus all around the quiet town.

Everett bought movie reel film in bulk from a mail-order house, rolled his own film, and developed it in a closet at home, but he never had the money to print his photographs. More than two thousand negatives stayed in a box while he married, raised a family, and worked as an electrical engineer in the Twin Cities. When he became ill with cancer in the fall of 2002—sixty years after he had developed the last of his bulk film—Everett opened his time capsule and printed the images from his youth. He died in 2003, having brought his childhood town back to life just as he was leaving it.

A sense of peace radiates from these images. Whether skinny-dipping in the Turkey River, wheelbarrow-racing, threshing oats, milking cows, visiting with relatives after church, or hanging out at the drugstore or the movies, Ridgeway’s hardworking citizens are modest and trusting and luminous in their graceful harmony and their unguarded affection for each other. Visiting the town in 2006 as he was writing the text to accompany these photographs, Jim Heynen crafted vignettes that perfectly complement these rediscovered images by blending fact and fiction to give context and voice to Ridgeway’s citizens.

Best known for his short-short stories about “the boys,” Jim Heynen has published widely as a writer of poems, novels, nonfiction, and short fiction. His stories about the boys have been featured often on National Public Radio’s “All Things Considered.” The most recent collection of these stories, The Boys’ House, was named Editors’ Choice for Best Books of 2001 by the Bloomsbury Review, Newsday, and Booklist. He wrote the text for Harker’s Barns: Visions of an American Icon, with photos by Michael Harker (Iowa, 2003).

Everett W. Kuntz bought his first camera in 1939 for $12.50. As he grew, Kuntz photographed his hometown of Ridgeway, Iowa and stored the film in shoeboxes. It was only after 60 years that he was financially able to print the last of his film, which can be found in Sunday Afternoon on the Porch. Kuntz died a year later, in 2003, after a long battle with cancer in his home of Mounds View, Minnesota.

“Everett Kuntz captures well a time when small-town life is about to change, a time between two eras, when the residents enjoy the security of a small community. His images remind us more exactly what the past looked like, not exactly as we remember it, but as it was at the time. Then we may truly know the place from which we came.”—Dwight Hoover, author, A Good Day's Work: An Iowa Farm in the Great Depression


"These pictures, resting like treasures in a time capsule from 1939 until now, are delights. They will take you backward almost 70 years. They show you the faces, fields, and porches of an America before World War II, a rural, almost innocent world. A little nostalgic? So what. Never has a country needed a little sane nostalgia more than this one. The photographs are garnished by Jim Heynen’s quick, witty, affectionate commentary. It nudges us smartly into the time capsule ourselves. If 2007 looks insane to you, peruse for a while this lovely, charming book that reminds us of what we used to look like—even sometimes be like." —Bill Holm