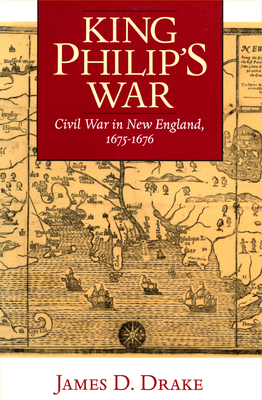 Sometimes described as "America's deadliest war," King Philip's War proved a critical turning point in the history of New England, leaving English colonists decisively in command of the region at the expense of native peoples. Although traditionally understood as an inevitable clash of cultures or as a classic example of conflict on the frontier between Indians and whites, in the view of James D. Drake it was neither. Instead, he argues, King Philip's War was a civil war, whose divisions cut across ethnic lines and tore apart a society composed of English colonizers and Native Americans alike. According to Drake, the interdependence that developed between English and Indian in the years leading up to the war helps explain its notorious brutality. Believing they were dealing with an internal rebellion and therefore with an act of treason, the colonists and their native allies often meted out harsh punishments. The end result was nothing less than the decimation of New England's indigenous peoples and the consequent social, political, and cultural reorganization of the region. In short, by waging war among themselves, the English and Indians of New England destroyed the world they had constructed together. In its place a new society emerged, one in which native peoples were marginalized and the culture of the New England Way receded into the past.

"What one has here is the genuine article—colonial history that is fully about all the peoples in the region. This is neither 'white' nor 'Indian' history. . . . It is the first serious scholarly history of King Philip's War in well over a generation. Drake is a historian who knows how to write, how to make his subjects fully human, tell multiple stories, and keep his readers eager for more."—Barry O'Connell, editor of On Our Own Ground: The Complete Writings of William Apess, a Pequot

"The need for a single-volume treatment of King Philip's War that is well informed not only by recent scholarship on native peoples but on the English colonizers is greater than ever. Drake satisfies that need by offering a series of provocative theses about the conflict and its protagonists. The result is a book that should be as productively controversial as Jill Lepore's The Name of War."—Neal Salisbury, author of Manitou and Providence: Indians, Europeans, and the Making of New England, 1500–1643

"This book is incredibly compelling to read . . . If one wants to learn about how modern New England was formed from the sparse settlements of Puritan Englishmen and Algonquin tribes, this book can be a wonderful contribution to a reader's efforts."—Historical Journal of Massachusetts