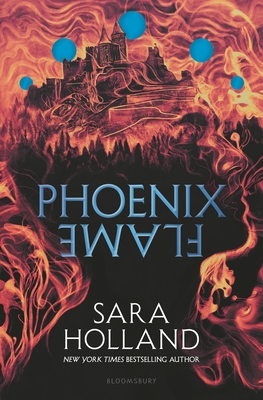 This is book number 2 in the Havenfall series.

"A vibrant world where magic is closer and more dangerous than we know." - Emily A. Duncan, New York Times bestselling author of Wicked Saints and Ruthless Gods, on Havenfall

Maddie Morrow thought her problems were over. She saved the Inn at Havenfall--a sanctuary between magical worlds hidden deep in the mountains of Colorado--from the evil Silver Prince. Her uncle the Innkeeper is slowly recovering from a mysterious spell that has left him not quite human. And there are still a few weeks of summer left to spend with her handsome, more-than-just-a-friend Brekken, even though she can't stop thinking about Taya.

But Maddie soon realizes there's more work to be done to protect the place her family has run for centuries. She must embark on a dangerous mission to put an end to the black-market trading of magical objects and open the Inn's doors to Solaria, the once feared land of shapeshifters.

As she tries to accomplish both seemingly impossible tasks, Maddie uncovers family secrets that could change everything. What if saving everyone means destroying the only home she's known?

This next breathtaking fantasy from New York Times bestselling Everless author Sara Holland is perfect for fans of Melissa Albert and Holly Black.

Sara Holland is the author of Havenfall and the New York Times bestsellers Everless and Evermore. She grew up in small-town Minnesota, but also in the countless fictional worlds of books. She graduated from Wesleyan University and worked in a tea shop, a dentist's office, and a state capitol building before heading to New York to work in publishing. These days, she can be found exploring the city's bookstores or finding new ways to put caffeine in her bloodstream.

“With action, adventure, and romance, Phoenix Flame is an epic young adult fantasy novel about the importance of doing what you know to be right.” —Foreword Reviews

“This sequel gives readers more of what they loved in Maddie's first adventure, expanding the world and its intriguing mythology even further.” —Booklist

“Twisting plot threads intersecting with tantalizing glimpses of fully realized other realms, Havenfall creates a vibrant world where magic is closer and more dangerous than we know. Maddie is a delightfully messy and real teenager and I adored following her as she tried to untangle the mysteries around her.” —Emily A. Duncan, New York Times bestselling author of WICKED SAINTS and RUTHLESS GODS, on HAVENFALL

“Rife with secrets, danger, and magic, Havenfall is a delightful read that blends a fantastical new world with ours in the most seamless and enthralling of ways.” —Hafsah Faizal, New York Times bestselling author of WE HUNT THE FLAME, on HAVENFALL

“Havenfall is contemporary fantasy at its finest, a smart, poignant rumination on home and family with a supernatural twist. Holland's seamless blending of reality and fantasy will leave you checking your closet doors for secret passages to other worlds, hoping to find a magical adventure of your own.” —Christine Lynn Herman, author of THE DEVOURING GRAY, on HAVENFALL

“Holland is no stranger to intricate worlds, as readers who loved Everless and its sequel will remember, and this new series starter is equally compelling.” —Booklist on HAVENFALL

“The twists are plentiful. . . . Fun premise and setting with a popcorn intrigue plot.” —Kirkus Reviews on HAVENFALL

“A suspenseful, engaging tale of a young woman trying to unravel her past to save her future.” —School Library Journal on HAVENFALL

“Gripping. . . . Holland populates her idyllic summit with a panoply of magical characters and powers.” —Publishers Weekly on HAVENFALL

“Readers will lose themselves in [Holland's] stunning prose for hours on end and be hungry for more when they reach the last page.” —Laura Sebastian, NEW YORK TIMES bestselling author of ASH PRINCESS

“Propelled by inventive lore and magic, Jules' story is a heady, addicting page-turner. . . Utterly absorbing; a must for fans of Sarah J. Maas.” —Kirkus Reviews on EVERLESS

“Holland builds this world effortlessly. . . An action-packed, must-have fantasy for all YA shelves.” —School Library Journal on EVERLESS

“Holland's lush, intricately drawn world hides an undercurrent of darkness underneath a veneer of beauty and finery, and the twists are genuinely surprising. . . Readers will eagerly await her next journey.” —Publishers Weekly on EVERLESS

“Holland's debut is set in an intricate and immersive fantasy world. The concept of Everless is refreshing and unique.” —Booklist on EVERLESS