Generation Friends: An Inside Look at the Show That Defined a Television Era (Paperback) 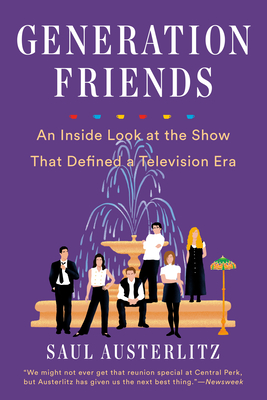 Praised by the New Yorker and New York magazine, Saul Austerlitz’s fascinating behind-the-scenes look at Friends, is, according to Newsweek, the “next best thing” to a cast reunion.

In September 1994, six friends sat down in their favorite coffee shop and began bantering about sex, relationships, jobs, and just about everything else. A quarter of a century later, new fans are still finding their way into the lives of Rachel, Ross, Joey, Chandler, Monica, and Phoebe, and thanks to the show’s immensely talented creators, its intimate understanding of its youthful audience, and its reign during network television’s last moment of dominance, Friends has become the most influential and beloved show of its era. Friends has never gone on a break, and this is the story of how it all happened.

Noted pop culture historian Saul Austerlitz utilizes exclusive interviews with creators David Crane and Marta Kauffman, executive producer Kevin Bright, director James Burrows, and many other producers, writers, and cast members to tell the story of Friends’ creation, its remarkable decade-long run, and its astonishing Netflix-fueled afterlife. Readers will go behind the scenes to hear from the people who were present as the show was developed and cast, written and filmed. There will be talk of trivia contests, prom videos, trips to London, Super Bowls, lesbian weddings, wildly popular hairstyles, superstar cameos, mad dashes to the airport, and million-dollar contracts. They’ll also discover surprising details—that Monica and Joey were the show’s original romantic couple, how Danielle Steel probably saved Jennifer Aniston’s career, and why Friends is still so popular that if it was a new show, its over-the-air broadcast reruns would be the ninth-highest-rated program on TV.

The show that defined the 1990s has a legacy that has endured beyond anyone's wildest expectations. And in this hilarious, informative, and entertaining book, readers will now understand why.

Saul Austerlitz is the author of four previous books, including Just a Shot Away and Sitcom. His work has been published by The Boston Globe, The New York Times Magazine, Esquire, Rolling Stone, Slate, and the Los Angeles Times. He is a graduate of Yale and NYU's Tisch School of the Arts, and is an adjunct professor of writing and comedy history at NYU.

“Saul Austerlitz gets at the heart of [the show’s] appeal.”
—New York magazine

“[An] under-the-hood chronicle of the nineties sitcom.”
—The New Yorker

“Austerlitz has written a love letter for fans of the show to remember key moments from the 10-season run of Friends while also revealing the good and bad of how difficult it is to create a show, put it on the air, and find lightning in a bottle.”
—Associated Press

"An engaging read with lots to appeal to Friends fans."
—Forbes

"We might not ever get that reunion special at Central Perk, but Austerlitz has given us the next best thing with this behind-the-scenes look at the world that brought us Monica, Rachel, Ross, Chandler, Phoebe and Joey."
—Newsweek

“All die-hard fans need to read this tome, which reveals never-before-known tidbits, including how the show writers’ lives inspired the storylines for the beloved characters.”
—Star

“Chock full of behind-the-scenes info, this fond accounting is a must-read for both new and old Friends fans.”
—Booklist (starred review)

“Addictively readable. Come because you’re a fan, stay because you realize that Friends did (take that, Chandler Bing!) define a cultural moment: a world where coffee shops were just beginning to take off as 'third places,' television wasn’t available to DVR or stream, and networks were starting to warm up to sitcoms about nothing. I’m halfway through Saul Austerlitz’s ode to this NBC hit, and I can’t wait to finish it and annoy my friends with fun Friends facts.”
—Sarah Gelman, director of books and editorial, Amazon Book Review blog

“A treat for Friends fans, from OG Must-See TV viewers to the new generation of streamers, full of insights into what made a quintessential '90s phenomenon into a lasting, international classic for the ages. You'll get your share of juicy behind-the-scenes tidbits, from vicious writers' room debates about Rachel and Joey's romance to the time the producers almost moved the setting to Minneapolis (seriously). But you'll also get a hit of nostalgia for a time when an entire nation hung on the fate of Ross and Rachel, and plenty of smart analysis of why Friends was the right show at the right time...and also continues to be the right show at an entirely different time.”
—Jennifer Keishin Armstrong, New York Times bestselling author of Seinfeldia

“Friends wasn't just a funny show—it was a generational work of art that evolved television’s scope. It proved that shows could travel beyond the dynamics of nuclear families and the virtue of strong cast chemistry. In Generation Friends, Saul Austerlitz transports us back to Central Perk with our eternal friends trying to find their place in the world. Just as importantly, he lifts the curtain to provide a sprawling behind-the-scenes look at its creation, enactment and still-growing legacy.”
—Jonathan Abrams, New York Times bestselling author of All the Pieces Matter

“With careful research and new and revealing interviews, Austerlitz's Generation Friends does what a great behind-the-scenes book should do: it'll make you want to re-watch the entire series again from start to finish, with a new appreciation of everything from the writing and acting to set design and costumes. Better yet, Austerlitz provides some much-needed validation for those of us who never warmed to the whole Ross-Rachel thing, assuring us that we *might* have been on to something, even as he argues we were wrong. FIGHT ME, SAUL.”
—Brian Jay Jones, New York Times bestselling author of Jim Henson: The Biography and Becoming Dr. Seuss

“The ultimate peek behind the scenes into the creation and execution of the series that broke new ground with its inclusion of a lesbian wedding and other LGBTQ-related storylines.”
—Baltimore Out Loud

“Guiding readers through Hollywood politics, notes from the network, and a complicated casting process, the author documents the creation of the legendary television show… Austerlitz also goes behind the scenes, detailing overnight writing sessions, contract negotiations, and disagreements with directors…. For followers of the program and lovers of pop culture.”
—Library Journal