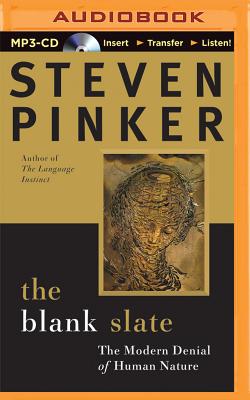 Our conceptions of human nature affect every aspect of our lives, from the way we raise our children to the political movements we embrace. Yet just as science is bringing us into a golden age of understanding human nature, many people are hostile to the very idea. They fear that discoveries about innate patterns of thinking and feeling may be used to justify inequality, to subvert social change, to dissolve personal responsibility, and to strip life of meaning and purpose.

In The Blank Slate, Steven Pinker, bestselling author of The Language Instinct and How the Mind Works, explores the idea of human nature and its moral, emotional, and political colorings. He shows how many intellectuals have denied the existence of human nature by embracing three linked dogmas: the Blank Slate (the mind has no innate traits), the Noble Savage (people are born good and corrupted by society), and the Ghost in the Machine (each of us has a soul that makes choices free from biology). Each dogma carries a moral burden, so their defenders have engaged in desperate tactics to discredit the scientists who are now challenging them.

Pinker injects calm and rationality into these debates by showing that equality, progress, responsibility, and purpose have nothing to fear from discoveries about a rich human nature. He disarms even the most menacing threats with clear thinking, common sense, and pertinent facts from science and history. Despite its popularity among intellectuals during much of the twentieth century, he argues, the doctrine of the Blank Slate may have done more harm than good. It denies our common humanity and our individual preferences, replaces hardheaded analyses of social problems with feel-good slogans, and distorts our understanding of government, violence, parenting, and the arts.

Pinker shows that an acknowledgment of human nature that is grounded in science and common sense, far from being dangerous, can complement insights about the human condition made by millennia of artists and philosophers. All this is done in the style that earned his previous books many prizes and worldwide acclaim: wit, lucidity, and insight into matters great and small.