The Wind Through the Keyhole: A Dark Tower Novel (The Dark Tower) (Paperback) 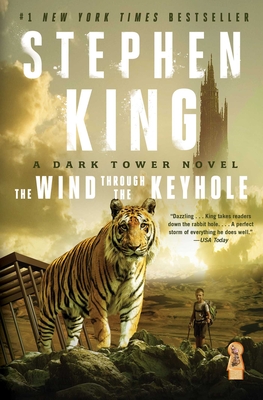 This is book number 4 in the The Dark Tower series.

In his New York Times bestselling The Wind Through the Keyhole, Stephen King returns to the spectacular territory of the Dark Tower fantasy saga to tell a story about gunslinger Roland Deschain in his early days.

The Wind Through the Keyhole is a sparkling contribution to the series that can be placed between Dark Tower IV and Dark Tower V. This Russian doll of a novel, a story within a story within a story, visits Roland and his ka-tet as a ferocious, frigid storm halts their progress along the Path of the Beam. Roland tells a tale from his early days as a gunslinger, in the guilt-ridden year following his mother’s death. Sent by his father to investigate evidence of a murderous shape-shifter, Roland takes charge of Bill Streeter, a brave but terrified boy who is the sole surviving witness to the beast’s most recent slaughter. Roland, himself only a teenager, calms the boy by reciting a story from the Book of Eld that his mother used to read to him at bedtime, “The Wind through the Keyhole.” “A person’s never too old for stories,” he says to Bill. “Man and boy, girl and woman, we live for them.”

And stories like The Wind Through the Keyhole live for us with Stephen King’s fantastical magic that “creates the kind of fully imagined fictional landscapes a reader can inhabit for days at a stretch” (The Washington Post).

“It’s both a pleasure and a surprise to encounter The Wind Through the Keyhole, a new, largely independent narrative set in a previously unexplored corner of Roland’s universe.”
— The Washington Post

“Masterful . . . King shows himself to be an ace storyteller yet again, spinning yarns like a favorite relative about a hero and his adventures in a world like our own but just slightly skewed.”
— USA Today

“Each nested narrative delivers its fair share of suspense, action and solid character work. King knows this fictional universe intimately, and his love for it shines through every page.”
— San Francisco Chronicle

“Vivid and precise . . . A genre mash-up of horror/western/detective fiction, in which our hero rides into town to wade through gore, solve a mystery, and bring justice to an unruly frontier town.”
— Esquire

“A fairy tale of great adventure and beauty.”
— Vulture

“Pitch-perfect . . . Even those who aren’t familiar with the series will find the conclusion both satisfying and moving.”
— Publishers Weekly