The Gatekeeper: Missy LeHand, FDR, and the Untold Story of the Partnership That Defined a Presidency (Paperback) 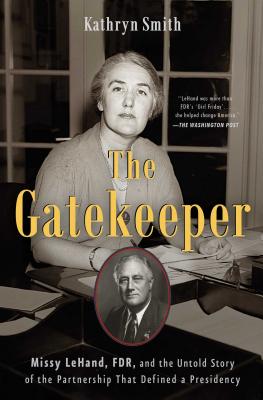 The “fine biography” and “compelling personal story” (The Wall Street Journal) of arguably the most influential member of Franklin Delano Roosevelt’s administration, Marguerite “Missy” LeHand, FDR’s de facto chief of staff, who has been misrepresented, mischaracterized, and overlooked throughout history…until now.

Widely considered the first—and only—female presidential chief of staff, Marguerite “Missy” LeHand was the right-hand woman to Franklin Delano Roosevelt—both personally and professionally—for more than twenty years. Although her official title as personal secretary was relatively humble, her power and influence were unparalleled. Everyone in the White House knew one truth: If you wanted access to Franklin, you had to get through Missy. She was one of his most trusted advisors, affording her a unique perspective on the president that no one else could claim, and she was deeply admired and respected by Eleanor Roosevelt.

With unprecedented access to Missy’s family and original source materials, journalist Kathryn Smith tells the “fascinating” (Publishers Weekly) and forgotten story of the intelligent, loyal, and clever woman who had a front-row seat to history in the making. The Gatekeeper is a thoughtful, revealing unsung-hero story about a woman ahead of her time, the true weight of her responsibility, and the tumultuous era in which she lived—and a long overdue tribute to one of the most important female figures in American history.

Kathryn Smith is a journalist and writer with a life-long interest in FDR and his circle. She has lived all her life in Georgia and South Carolina, and earned a bachelor’s degree in journalism at the University of Georgia. She worked as a daily newspaper reporter and editor, and has been the book columnist for the Anderson Independent Mail for twenty years. She has been involved through Rotary International in the worldwide effort to eradicate polio, called PolioPlus, and she has lectured and spoken on FDR’s leadership in that arena. Smith is the author of an oral history of World War II told by living veterans and civilians called “A Necessary War.”

"[A] fine biography....Ms. Smith has filled a small gap in Roosevelt historiography with this compelling personal story."
— The Wall Street Journal

"In The Gatekeeper, Kathryn Smith does full justice to the fascinating and heartbreaking life of Missy LeHand, who rose from a working-class background to become a close confidant and trusted adviser to Franklin D. Roosevelt and one of the most influential figures in his administration. Although Missy’s total devotion to FDR made her indispensable to him, she sacrificed much in the process, including other personal relationships and, ultimately, her life. Thanks to Smith,she is — at long last — getting the recognition she deserves."
— Lynne Olson, author of Those Angry Days: Roosevelt, Lindbergh, and America’s Fight Over World War II, 1939-1941

"A much-needed, balanced...marvelous portrait of a professional woman ahead of her time whose relationship with FDR sheds new light on his personality and decisions."
— Kirkus Reviews, starred review

Kathryn Smith’s The Gatekeeper is a vivid, much-needed life of one of the least-known but most consequential figures in FDR’s immediate circle, Missy LeHand. Anyone interested in Roosevelt, the New Deal or the path toward global war will want to snap it up.
— Geoffrey C. Ward, author of A First Class Temperament: The Emergence of FDR