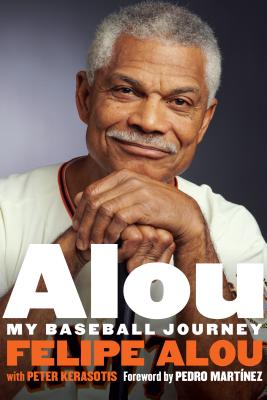 Growing up in a tiny shack in the Dominican Republic, Felipe Alou never dreamed he would be the first man born and raised in his country to play and manage in Major League Baseball—and also the first to play in the World Series.

In this extraordinary autobiography, Alou tells of his real dream to become a doctor, and an improbable turn of events that led to the pro contract. Battling racism in the United States and political turmoil in his home country, Alou persevered, paving the way for his brothers and scores of other Dominicans, including his son Moisés.

Alou played seventeen years in the Major Leagues, accumulating more than two thousand hits and two hundred home runs, and then managed for another fourteen years—four with the San Francisco Giants and ten with the Montreal Expos, where he became the winningest manager in franchise history. Alou’s pioneering journey is embedded in the history of baseball, the Dominican Republic, and a remarkable family.
Purchase the audio edition.

Felipe Alou serves as special assistant to the general manager for the San Francisco Giants. He is an inductee in both the Canadian and the Latino Baseball Hall of Fame and lives with his wife, Lucie, in Boynton Beach, Florida. Peter Kerasotis is an author and journalist who has won ten Associated Press Sports Editor awards, six Football Writers Association of America awards, and seven Florida Sports Writers Association awards. Pedro Martínez is a Hall of Fame pitcher who, like Felipe Alou, is a native of the Dominican Republic. Bruce Bochy is a former Major League Baseball player who managed the Padres for twelve seasons and most recently managed the San Francisco Giants for thirteen seasons, during which he led the Giants to three World Series Championships.

"A worthwhile journey into baseball's history and the rich story of one remarkable baseball man. All of us who know Alou are aware that his tale is remarkable. This book brings his story alive: his path from an impoverished upbringing to track star to baseball player to become the first major-league player from the Dominican Republic. . . . Alou is a precious part of the history of the Giants and the game."—Ann Killion, San Francisco Chronicle

"Famed outfielder Alou, who made history in 1958 as the first person to go from the Dominican Republic to playing with a major league team, delivers a fascinating memoir of his baseball career. . . . This is a powerful memoir of a remarkable player who made a lasting impact on America's pastime."—Publishers Weekly

"An engrossing book, with baseball as the background and the lessons from a remarkable life going well beyond the game."—Jorge L. Ortiz, USA Today

"It's not surprising that his new book, Alou: My Baseball Journey, is just as much a life journey as it is about baseball. . . . I can’t think of anyone I respect in the game any more than Felipe Alou."—Barry M. Bloom, Forbes

"In reading his memoir Alou: My Baseball Journey . . . two things become abundantly clear: Felipe Alou refuses to be silent or be silenced; and the Dominican remains steadfast in his commitment to the belief that everyone deserves to be treated with dignity and respect—from immigrant newcomers and the poor to black and Latino baseball players, as well as those beyond the playing field."—Adrian Burgos, La Vida Baseball

"In his extraordinary autobiography, co-written with sportswriter Peter Kerasotis, Alou tells of the political and personal turmoil he faced as he paved the way for future Dominican ball players."—Dominican Today

“Sometimes the people who don’t crave attention are the ones who deserve it the most. That’s Felipe Alou. He is one of the best and most caring teammates I ever had. I learned from him what leadership is all about and what it means to be a man. I admired him greatly, first as a fan, then as a teammate, and now, most important, as a friend. Felipe has lived a Hall of Fame life, and in Alou you’ll learn why.”—Joe Torre


“It’s an honor to have Felipe Alou as my friend and especially to have him in my career and in my life as a mentor. He blazed a trail for Latin Americans that few men could’ve accomplished, and he did it with class and character. His story, and what he overcame and achieved, will embarrass and enlighten, sadden and inspire, anger and uplift. Felipe Alou is one of the best ambassadors for baseball and an even better ambassador for the human race.”—Reggie Jackson


“If Alou was only about Felipe Alou’s legendary baseball career as a player and manager it would be an important read, but it’s much more. Alou not only captures an extraordinary life; it delivers compelling insights into life’s realities. As the first to go from the Dominican Republic to Major League Baseball—both as a player and a manager—Felipe Alou opened the way for his brothers Matty and Jesús, his fellow countrymen, and for scores of other Latin Americans. If you don’t know much about Felipe Alou, this book will convince you that he is as special as anyone who has ever worn a Major League uniform. For those of us who know and admire him, reading Alou makes us appreciate that he is even greater than we imagined.”—Tony La Russa

“Felipe Alou played with Willie Mays and managed Barry Bonds. He played a Major League Game in the same outfield with his two brothers, and then saw his son become a Major League star in his own right. He was the first Dominican born and raised to make it to the Major Leagues, opening the door for scores of others. Felipe Alou has a rich and vivid story to tell, and here it is.”—Bob Costas

“The big, sprawling, international baseball life of Felipe Alou is a grand story all its own. But Alou becomes much more than a baseball book in the hands of coauthor Peter Kerasotis. His storytelling skills give Alou the depth and cultural richness that take you beyond the diamond.”—Tom Verducci, Sports Illustrated senior writer, three-time National Sportswriter of the Year, and best-selling author

“I was a Minor League manager when I heard the booming voice and felt the huge persona that is Felipe Alou, and I thought I was in the presence of a baseball god. Then I got to know this remarkable man, a man who made my path to managing in the Major Leagues easier when he didn’t have to.”—Buck Showalter

"As the Giants commemorate their 60th anniversary in San Francisco throughout the 2018 season, there is little doubt that Alou will be celebrated accordingly. He, and his story, should be celebrated throughout baseball, too."—Katie Woo, Cronkite News

"A very good book that fans of the Giants, Expos and baseball in general will enjoy. If a reader is interested in the history of Latin American players in the game, Alou's experiences will certainly be of interest to that person."—Lance Smith, Guy Who Reviews Sports Books

"This is an important book. This is a Jackie Robinson story from a different place in a different time. . . . This life began in the Dominican Republic and it is about the uphill battles against discrimination of Latin American players at every baseball level."—Gary Thorne, Hitting the Books

"This is a great baseball book. You don't need to just be a fan of the Giants or the Expos. If you are a baseball fan, there is a lot here to keep the reader interested. Felipe Alou was a pioneer for baseball and the Latin players."—KNUP Sports

"This is an excellent work that should be part of any baseball aficionado's library.  Of course, it covers the life of a great ballplayer and manager in total.  But it is much more than that.  Alou and Kerasotis contextualize the experiences of this legend and use it to shed light on the key social issues, and baseball's place in these, from the 1950s through the current time.  Baseball truly is the national pastime, it just so happens that as our nation's demographics have changed, so have those of the sport.  By reading this work, we get great insight, the good, the bad and the ugly, into what it was like to be at ground zero of the genesis of this makeover."—Jorge Iber, Sport in American History

"A detailed portrait of his days with the Giants and other teams, Alou also recounts how his career was shaped by social and political forces in two countries. This gives the book a richness that’s not found in your standard athlete autobiography."—Kevin Canfield, Datebook