The Line Becomes a River: Dispatches from the Border (Large Print / Paperback) 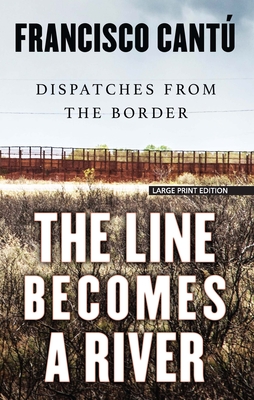 “Cantu personalizes the U.S.-Mexican border and all of its complexity in a way I've never seen. His writing is beautiful, with haunting and detailed descriptions of the desert, the immigrants, the cartels, and his own fears about violence and identity confusion. The criminalization of searching for a better life and the dehumanization of the process is looked at from several angles, and his journalistic approach does not make judgments, but clearly tells the facts. A great new writer to follow.”
— Pat Marsello, Bookworks, Albuquerque, NM

“In a personal search for the purpose and meaning behind the U.S.-Mexico border, Cantúreflects on his childhood rooted in the Southwest, his mother’s immigration from Mexico, his scholarly studies, and others’ stories about the border. He seeks work as a border patrol agent, thinking his language skills and cultural sensitivity will be of value, but his intense curiosity about life at the border becomes a harsh reality that haunts his dreams. A lifesaver in America’s shallow rivers of rhetoric, Cantúenlightens readers on the endless American story of sacrifice and immigration with sharp insight and subtle lyricism.”
— Lisa Newman, Lemuria Bookstore, Jackson, MS

NAMED A TOP 10 BOOK OF 2018 BY NPR and THE WASHINGTON POST
WINNER OF THE LOS ANGELES TIMES BOOK PRIZE IN CURRENT INTEREST
FINALIST FOR THE NATIONAL BOOK CRITICS CIRCLE NONFICTION AWARD
The instant New York Times Bestseller, "A must-read for anyone who thinks 'build a wall' is the answer to anything." --Esquire

For Francisco Cant�, the border is in the blood: his mother, a park ranger and daughter of a Mexican immigrant, raised him in the scrublands of the Southwest. Driven to understand the hard realities of the landscape he loves, Cant� joins the Border Patrol. He and his partners learn to track other humans under blistering sun and through frigid nights. They haul in the dead and deliver to detention those they find alive. Plagued by a growing awareness of his complicity in a dehumanizing enterprise, he abandons the Patrol for civilian life. But when an immigrant friend travels to Mexico to visit his dying mother and does not return, Cant� discovers that the border has migrated with him, and now he must know the full extent of the violence it wreaks, on both sides of the line.