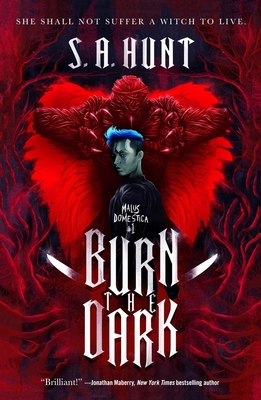 This is book number 1 in the Malus Domestica series.

Chilling Adventures of Sabrina meets Stranger Things in award-winning author S. A. Hunt’s Burn the Dark, first in the Malus Domestica horror action-adventure series about a punk YouTuber on a mission to bring down witches, one vid at a time.

Robin is a YouTube celebrity gone-viral with her intensely-realistic witch hunter series. But even her millions of followers don't know the truth: her series isn’t fiction.

Her ultimate goal is to seek revenge against the coven of witches who wronged her mother long ago. Returning home to the rural town of Blackfield, Robin meets friends new and old on her quest for justice. But then, a mysterious threat known as the Red Lord interferes with her plans….

“Burn the Dark is a brilliant debut! S. A. Hunt gets everything right about the creepier aspects of digital culture and presents a compelling and memorable female lead.” —Jonathan Maberry, New York Times bestselling author of V-Wars and Glimpse

“S. A. Hunt's Burn the Night is a bold, sharp, fresh take on urban fantasy that brings it into the 21st century. The characters feel real and their flaws make them beautiful. The world building is impressive and immersive, the prose is sharp and tight, and the scary is damn scary. It's a lot of fun!” —R. S. Belcher, author of Brotherhood of the Wheel and M. I. B. International (novelization)

“Immaculate worldbuilding drives this atmospheric series opener from Hunt (Law of the Wolf) . . . With a detailed setting and an ear for dialogue, Hunt captures a distinct feeling of Southern Americana. The cliff-hanger ending is sure to leave readers eager for the next installment.” —Publishers Weekly

“Hunt supplies each character with snappy dialogue and situates the action in a Southern Gothic setting evocative of other supernatural series, such as Charlaine Harris' Sookie Stackhouse books. Robin is a distinctly modern new heroine, combining classic tropes with twenty-first-century methods. She might be the only hunter in literature to keep her passive income stream in mind while shooting B-roll on the way to confront witches, which is likely to delight readers looking for a new twist in their horror picks.”—Booklist