The Dysasters: The Graphic Novel (Paperback) 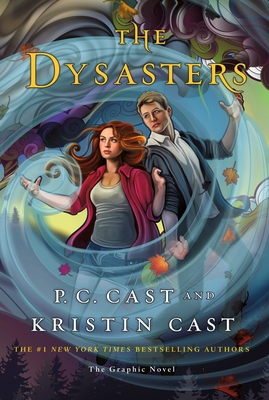 In their newest graphic novel adaptation, #1 New York Times bestsellers P.C. and Kristin Cast bring us the world of The Dysasters.

Adoptive daughter of a gifted scientist, Foster Stewart doesn’t live a “normal” life, (not that she’d want to). But controlling cloud formations and seeing airwaves aren’t things most eighteen year olds can do.

Small town star quarterback and quintessential dreamy boy next door, Tate “Nighthawk” Taylor has never thought much about his extra abilities. Sure, his night vision comes in handy during games, but who wouldn’t want that extra edge?

From the moment Foster and Tate collide, their worlds spiral and a deadly tornado forces them to work together, fully awakening their not-so-natural ability - the power to control air.

As they each deal with the tragic loss of loved ones, they’re caught by another devastating blow – they are the first in a group of teens genetically manipulated before birth to bond with the elements, and worse… they’re being hunted.

Now, Foster and Tate must fight to control their abilities as they learn of their past, how they came to be, who’s following them, and what tomorrow will bring… more DYSASTERS?

"The Casts, a mother-and-daughter writing team, craft a page-turning superhero origin story with a touch of romance." - Kirkus on The Dysasters: The Graphic Novel

“This sci-fi romance offers a diverse cast and an action-packed plot; a great choice for both new adult and young adult readers. An engaging read.” - School Library Journal

“The mother-daughter writing team has a built-in audience from their phenomenally popular House of Night books; a must-buy for genre fans.” - Booklist

“I would recommend this to fans of science fiction, stormy weather, elements, superheroes, and unique plots.” - Young Adult Book Central