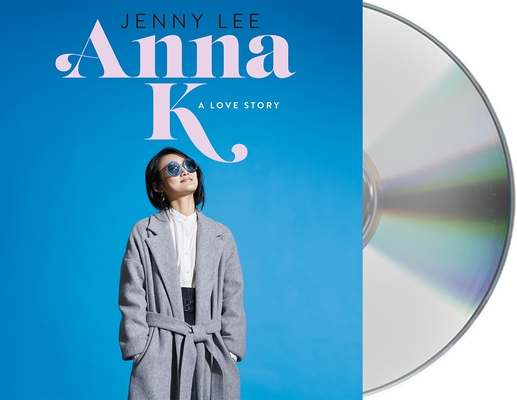 By Jenny Lee, Jenna Ushkowitz (Read by)
Email or call for price.
It's Complicated, contact us

This is book number 1 in the Anna K series.

ANNA K is the book I didn't know I needed until I heard it was happening. ANNA KARENINA is one of my favorite books, and all the things I loved about it in high school can be found in this updated retelling without the treatise on landowning. Essentially this is the most intellectual season of Gossip Girl you can imagine. I knew from hearing her speak that Lee had captured the heart of the story but I did not expect the ways in which she subverted the narrative. Giving the main characters a Korean heritage kept the pressure of tradition and family that Anna is pushing against while still making the story feel fresh and new. I thought I knew how things would end up, but I was still surprised at the choices made. If you like the feel of classic literature but want something a bit more current, read this. Tolstoy wrote for the every man and Lee is writing for every teenage girl. Also, there are dogs.

Narrator Jenna Ushkowitz is an award-winning actress, singer, producer, and podcast host best known for her role as Tina Cohen-Chang on Glee.

At seventeen, Anna K is at the top of Manhattan and Greenwich society (even if she prefers the company of her horses and dogs); she has the perfect (if perfectly boring) boyfriend, Alexander W.; and she has always made her Korean-American father proud (even if he can be a little controlling). Meanwhile, Anna's brother, Steven, and his girlfriend, Lolly, are trying to weather a sexting scandal; Lolly’s little sister, Kimmie, is struggling to recalibrate to normal life after an injury derails her ice dancing career; and Steven’s best friend, Dustin, is madly (and one-sidedly) in love with Kimmie.

As her friends struggle with the pitfalls of ordinary teenage life, Anna always seems to be able to sail gracefully above it all. That is…until the night she meets Alexia “Count” Vronsky at Grand Central. A notorious playboy who has bounced around boarding schools and who lives for his own pleasure, Alexia is everything Anna is not. But he has never been in love until he meets Anna, and maybe she hasn’t, either. As Alexia and Anna are pulled irresistibly together, she has to decide how much of her life she is willing to let go for the chance to be with him. And when a shocking revelation threatens to shatter their relationship, she is forced to question if she has ever known herself at all.

Dazzlingly opulent and emotionally riveting, Anna K: A Love Story is a brilliant reimagining of Leo Tolstoy's timeless love story, Anna Karenina—but above all, it is a novel about the dizzying, glorious, heart-stopping experience of first love and first heartbreak.

"Lee skillfully weaves beats of the classic Russian novel into the contemporary plot of her first YA novel, but readers will need no previous knowledge of Tolstoy to appreciate the social stakes, heartbreak, humor and moral complexity of Anna K" —BookPage, starred review

"Anna Karenina gets a Gossip Girl–infused reboot in Lee’s debut YA novel, which embraces the original novel’s vast cast and slow-burn pace... A twist ending will shock even the most devoted of Tolstoy fans—but that’s one secret we’ll never tell." — Booklist

Jenny Lee is a television writer and producer who has worked on BET’s Boomerang, IFC’s Brockmire, Freeform’s Young & Hungry, and the Disney Channel's number-one-rated kids' show, Shake It Up. Jenny has previously published humor essay collections and middle-grade novels, and Anna K. is her debut YA novel. She lives in Los Angeles with her husband and 135-pound Newfoundland, Gemma (and yes, it's a toss-up on who's walking who every day).

JENNA USHKOWITZ plays Tina on the huge FOX hit, Glee. She started her acting career at the age of three and made her first appearance on Broadway’s The King and I at the age of nine. Jenna returned to Broadway for Spring Awakening and has been on Glee since the show's inception.