Big Lies in a Small Town: A Novel (CD-Audio) 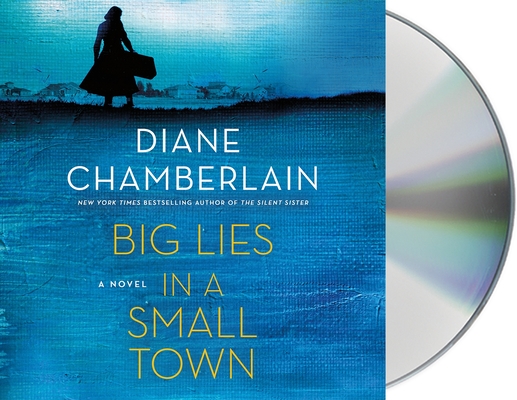 Diane brings to life 2 strong women in different times struggling against the constraints they have imposed on themselves. Morgan Christopher's takes the fall for a crime she did not commit, and is serving a three-year stint in a NC Prison. Desperate to leave prison she agrees to restore a mural in a small town, shrouded in secrets. What she finds under the layers of years of dirt and neglect is a painting that tells the story of madness, violence, a conspiracy and maybe clues to a 1940's disappearance of the original mural painter. Diane writes with such a keen eye to detail and this book will take you for a ride while making you understand the why's of someone's mistakes.

“Big Lies in a Small Town offers an intriguing mystery that caused me to stay up way past my bedtime on several occasions. The author perfectly weaves the 1940 and the 1918 storylines throughout alternating chapters, captivating the reader with main characters Anna and Morgan, as well as a host of fascinating supporting players. The ending offers a surprise twist that catches the reader unaware. A must-read for mystery lovers as well as those who appreciate art.”
— Gayle Lovvorn, Noteworthy Bookstore, Stamford, TX

"Narrator Susan Bennett offers a moving performance of this multilayered story of two women whose lives are affected by a WPA mural...Overall, Bennett adds an exciting dimension to a gripping story of racism, madness, murder, and even romance." — AudioFile Magazine, Earphones Award winner

From New York Times bestselling author Diane Chamberlain comes a novel of chilling intrigue, a decades-old disappearance, and one woman’s quest to find the truth…

North Carolina, 2018:
Morgan Christopher's life has been derailed. Taking the fall for a crime she did not commit, her dream of a career in art is put on hold—until a mysterious visitor makes her an offer that will get her released from prison immediately. Her assignment: restore an old post office mural in a sleepy southern town. Morgan knows nothing about art restoration, but desperate to be free, she accepts. What she finds under the layers of grime is a painting that tells the story of madness, violence, and a conspiracy of small town secrets.

North Carolina, 1940:
Anna Dale, an artist from New Jersey, wins a national contest to paint a mural for the post office in Edenton, North Carolina. Alone in the world and in great need of work, she accepts. But what she doesn't expect is to find herself immersed in a town where prejudices run deep, where people are hiding secrets behind closed doors, and where the price of being different might just end in murder.

What happened to Anna Dale? Are the clues hidden in the decrepit mural? Can Morgan overcome her own demons to discover what exists beneath the layers of lies?

Praise for Big Lies in a Small Town:

"Chamberlain’s depictions of creative beauty and perseverance across time and in the face of inevitable obstacles will keep readers turning the pages."—Publishers Weekly

"Chamberlain’s writing is reminiscent of a quilt made up of pieces from different people, places, and times, stitched together into a single, emotional story."—Booklist

DIANE CHAMBERLAIN is the bestselling author of more than twenty novels published in over eleven languages. Her books include The First Lie, Her Mother's Shadow, The Good Father, and Kiss River. She lives in North Carolina with her partner, photographer John Pagliuca, and her shelties, Keeper and Cole.

Susan Bennett is known for her radio and television voiceover work. She has narrated a host of audiobooks, including those from bestselling authors Peggy Post, Linda Francis Lee, Dorothea Benton Frank, Emma McLaughlin, and Nicola Kraus. Her reading of Tiger, Tiger by Margaux Fragoso won an AudioFile Earphones Award. In describing Susan’s reading style, Publishers Weekly has said, “Bennett's narration is excellent: she draws the listener into the story... keeping the pacing brisk and entertaining.” Susan also dabbles in the music industry as the singer and keyboardist for The Interactive! Band. Along with her guitarist husband, Rick Hinkle, Bennett is the co-owner of Audiocam Music, a full service recording studio.