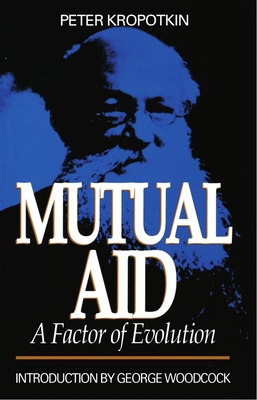 In Mutual Aid, which was first published in 1903, the renowned geographer applies his explorations of Eastern Asia and his study of wild-animal behaviour to a critical examination of the theory of evolution. His arguments anticipate in a remarkable way the contention of contemporary ecologists that the world of nature is one of interdependence rather than strife.   Born in 1942 into an ancient military family of Russian princes, Peter Alexeivich Kropotkin was selected as a child for the elite Corps of Pages by Czar Nicholas I himself. Shortly before his death in 1921, Kropotkin had moved so far from his aristocratic beginnings and had attained such stature as a libertarian leader that he could with with impunity to Lenin, “Vladimir Ilyich, your actions are completely unworthy of the ideas you pretend to hold.”   Kropotkin provides a potent argument for anarchism by showing that people tend to cooperate spontaneously and that the state destroys this natural inclination towards mutual aid by strangling initiative with the dead hand of regulation.   With the exception of his memoirs, this is Kropotkin's best-known work, and it is widely regarded as his masterpiece. It forms the cornerstone of his philosophy, and constitutes the most successful attempt by any writer to put anarchism on a scientific foundation. Mutual Aid is still the best refutation of the Darwinian thesis of survival of the fittest.

Peter Kropotkin (1842–1921) was a renown Russian scientist and anarchist philosopher and activist who lectured across Europe and North America and published widely. His many books include Words of a Rebel and Fields, Factories and Workshops.