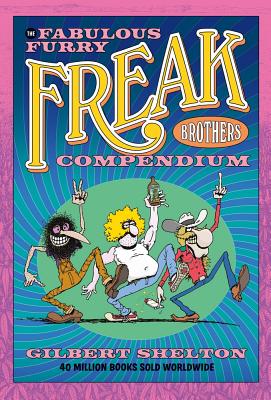 This book is an introduction sampler to The Freak Brothers for the new reader, containing a selection of the best classic comic strips from the past 50 years. Gilbert Shelton’s comics and books have now sold over 40 million copies worldwide in 17 languages.

Born in Dallas in 1940, Gilbert Shelton’s unlikely first venture into the world of comic art was doing strips for Boy Scout publications when he was in the Explorer Scouts at school. At university in Austin, Texas he became editor of the official student magazine, The Texas Ranger, for $100 an issue. This was to prove Shelton’s last ‘real job’. For in 1968, after contributing to various underground comix with his earliest character, Wonder Wart-Hog, and designing posters for rock concerts, Shelton created The Fabulous Furry Freak Brothers. In 1969 Shelton and some friends from Texas moved to San Francisco to set up Rip Off Press from where Freak Brothers strips were soon syndicated, borrowed (or stolen!) by a host of American underground newspapers and magazines. The first collection was published in 1971 and has since been joined by thirteen further Freak Brothers adventures. Fat Freddy’s Cat, the feline world’s number one cat, started out as a footnote strip to the Freak Brothers but has led an independent – and very successful – life since 1975. In 1993 Shelton introduced new characters, Not Quite Dead, the world’s least successful Rock Band who have since appeared in a series of comics of their own. Now over 50 years later and unlike many cults from the sixties which have since faded away, The Freak Brothers are still going from strength to strength and acquiring new fans all the time. They are published in 17 languages and worldwide sales are now over 40 million copies plus millions of items of merchandise, T-shirts, postcards, badges, posters and more. Shelton currently lives in Paris with his wife and three cats.

“Wonderful, wonderful stuff. The Freak Brothers define all that is good and funny in underground comics, able to simultaneously criticise society and laugh at the counter culture”  —The Alien Online