Creativity, Inc.: Overcoming the Unseen Forces That Stand in the Way of True Inspiration (Hardcover) 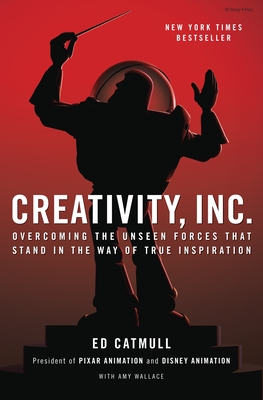 From a co-founder of Pixar Animation Studios—the Academy Award–winning studio behind Coco, Inside Out, and Toy Story—comes an incisive book about creativity in business and leadership for readers of Daniel Pink, Tom Peters, and Chip and Dan Heath.

NEW YORK TIMES BESTSELLER | NAMED ONE OF THE BEST BOOKS OF THE YEAR BY The Huffington Post • Financial Times • Success • Inc. • Library Journal

Creativity, Inc. is a manual for anyone who strives for originality and the first-ever, all-access trip into the nerve center of Pixar Animation—into the meetings, postmortems, and “Braintrust” sessions where some of the most successful films in history are made. It is, at heart, a book about creativity—but it is also, as Pixar co-founder and president Ed Catmull writes, “an expression of the ideas that I believe make the best in us possible.”

For nearly twenty years, Pixar has dominated the world of animation, producing such beloved films as the Toy Story trilogy, Monsters, Inc., Finding Nemo, The Incredibles, Up, WALL-E, and Inside Out, which have gone on to set box-office records and garner thirty Academy Awards. The joyousness of the storytelling, the inventive plots, the emotional authenticity: In some ways, Pixar movies are an object lesson in what creativity really is. Here, in this book, Catmull reveals the ideals and techniques that have made Pixar so widely admired—and so profitable.

As a young man, Ed Catmull had a dream: to make the first computer-animated movie. He nurtured that dream as a Ph.D. student at the University of Utah, where many computer science pioneers got their start, and then forged a partnership with George Lucas that led, indirectly, to his co-founding Pixar in 1986. Nine years later, Toy Story was released, changing animation forever. The essential ingredient in that movie’s success—and in the thirteen movies that followed—was the unique environment that Catmull and his colleagues built at Pixar, based on leadership and management philosophies that protect the creative process and defy convention, such as:

• Give a good idea to a mediocre team, and they will screw it up. But give a mediocre idea to a great team, and they will either fix it or come up with something better.
• If you don’t strive to uncover what is unseen and understand its nature, you will be ill prepared to lead.
• It’s not the manager’s job to prevent risks. It’s the manager’s job to make it safe for others to take them.
• The cost of preventing errors is often far greater than the cost of fixing them.
• A company’s communication structure should not mirror its organizational structure. Everybody should be able to talk to anybody.

Ed Catmull is co-founder of Pixar Animation Studios and president of Pixar Animation and Disney Animation. He has been honored with five Academy Awards, including the Gordon E. Sawyer Award for lifetime achievement in the field of computer graphics, and the ACM A.M. Turing Award for major contributions of lasting importance to computing. He received his Ph.D. in computer science from the University of Utah. He lives in San Francisco with his wife and children.

“Just might be the best business book ever written.”—Forbes

“Achieving enormous success while holding fast to the highest artistic standards is a nice trick—and Pixar, with its creative leadership and persistent commitment to innovation, has pulled it off. This book should be required reading for any manager.”—Charles Duhigg, author of The Power of Habit

“Steve Jobs—not a man inclined to hyperbole when asked about the qualities of others—once described Ed Catmull as ‘very wise,’ ‘very self-aware,’ ‘really thoughtful,’ ‘really, really smart,’ and possessing ‘quiet strength,’ all in a single interview. Any reader of Creativity, Inc., Catmull’s new book on the art of running creative companies, will have to agree. Catmull, president of both Pixar and Walt Disney Animation, has written what just might be the most thoughtful management book ever.”—Fast Company

“It’s one thing to be creative; it’s entirely another—and much more rare—to build a great and creative culture. Over more than thirty years, Ed Catmull has developed methods to root out and destroy the barriers to creativity, to marry creativity to the pursuit of excellence, and, most impressive, to sustain a culture of disciplined creativity during setbacks and success. Pixar’s unrivaled record, and the joy its films have added to our lives, gives his method the most important validation: It works.”—Jim Collins, co-author of Built to Last and author of Good to Great

“Too often, we seek to keep the status quo working. This is a book about breaking it.”—Seth Godin

“What is the secret to making more of the good stuff? Every so often Hollywood embraces a book that it senses might provide the answer. . . . Catmull’s book is quickly becoming the latest bible for the show business crowd.”—The New York Times

“The most practical and deep book ever written by a practitioner on the topic of innovation.”—Prof. Gary P. Pisano, Harvard Business School

“Business gurus love to tell stories about Pixar, but this is our first chance to hear the real story from someone who lived it and led it. Everyone interested in managing innovation—or just good managing—needs to read this book.”—Chip Heath, co-author of Switch and Decisive

“A fascinating story about how some very smart people built something that profoundly changed the animation business and, along the way, popular culture . . . [Creativity, Inc.] is a well-told tale, full of detail about an interesting, intricate business. For fans of Pixar films, it’s a must-read. For fans of management books, it belongs on the ‘value added’ shelf.”—The Wall Street Journal

“Pixar uses technology only as a means to an end; its films are rooted in human concerns, not computer wizardry. The same can be said of Creativity Inc., Ed Catmull’s endearingly thoughtful explanation of how the studio he co-founded generated hits such as the Toy Story trilogy, Up and Wall-E. . . . [Catmull] uses Pixar’s triumphs and near-disasters to outline a system for managing people in creative businesses—one in which candid criticism is delivered sensitively, while individuality and autonomy are not strangled by a robotic corporate culture.”—Financial Times

“A wonderful new book . . . Unlike most books written by founders, this isn’t some myth-heavy legacy project—it’s far closer to a blueprint. Catmull takes us inside the Pixar ecosystem and shows how they build and refine excellence, in revelatory detail. . . . If you do creative work, you should read it, now.”—Daniel Coyle, author of The Talent Code

“A superb debut intended for managers in all fields of endeavor . . . He takes readers inside candid discussions and retreats at which participants, assuming the early versions of movies are bad, explore ways to improve them. Unusually rich in ideas, insights and experiences, the book celebrates the benefits of an open, nurturing work environment. An immensely readable and rewarding book that will challenge and inspire readers to make their workplaces hotbeds of creativity.”—Kirkus Reviews (starred review)

“Punctuated with surprising tales of how the company’s films were developed and the company’s financial struggles, Catmull shares insights about harnessing talent, creating teams, protecting the creative process, candid communications, organizational structures, alignment, and the importance of storytelling. . . . [Creativity, Inc.] will delight and inspire creative individuals and their managers, as well as anyone who wants to work ‘in an environment that fosters creativity and problem solving.’”—Publishers Weekly (starred review)

“For anyone managing anything, and particularly those trying to manage creative teams, Catmull is like a kind, smart godfather guiding us toward managing wisely, without losing our souls, and in a way that works toward greatness. Perhaps it’s all Up from there.”—The Christian Science Monitor

“Many have attempted to formulate and categorize inspiration and creativity. What Ed Catmull shares instead is his astute experience that creativity isn’t strictly a well of ideas, but an alchemy of people. In Creativity, Inc. Ed reveals, with commonsense specificity and honesty, examples of how not to get in your own way and how to realize a creative coalescence of art, business, and innovation.”—George Lucas

“This is the best book ever written on what it takes to build a creative organization. It is the best because Catmull’s wisdom, modesty, and self-awareness fill every page. He shows how Pixar’s greatness results from connecting the specific little things they do (mostly things that anyone can do in any organization) to the big goal that drives everyone in the company: making films that make them feel proud of one another.”—Robert I. Sutton, Stanford professor and author of The No A**hole Rule and co-author of Scaling Up Excellence