A House Divided: Slavery and American Politics from the Constitution to the Civil War (Hardcover) 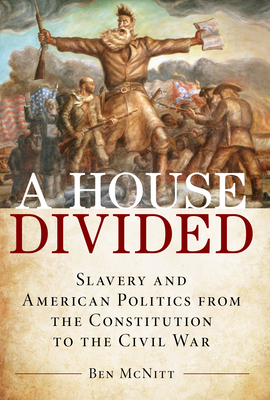 Slavery is one of the central, most enduringly significant facts of U.S. history. It loomed like a dark cloud over the country's birth at the Constitutional Convention in 1787 and shaped the most important nodes of American history before the Civil War. Even today, the country continues to debate its past as it relates to slavery, and the political and geographic contours of human bondage endure into the twenty-first century. In a deeply researched, wide-ranging book, retired journalist Ben McNitt tells the story of how slavery shaped American politics--and indeed the American story--from the Founding until the Civil War. McNitt's sharp narrative covers people and events that still resonate: Thomas Jefferson, John Calhoun, Andrew Jackson, the slave revolts of Denmark Vesey and Nat Turner, the Missouri Compromise and the Compromise of 1850, Harriet Tubman, Frederick Douglass, abolitionists like William Lloyd Garrison and Elizabeth Cady Stanton, John Brown and Harpers Ferry, fire-eating secessionists, and the rise of Abraham Lincoln to the presidency. No other single work covers this topic as comprehensively and accessibly.

Ben McNitt began his career as a political reporter at the Arizona Daily Star and later moved to the Tucson Citizen as Arizona's first environmental reporter. In the early 1980s, he worked as a freelance reporter for CBS News in the Middle East and then became CNN's Cairo Bureau Chief and Mid-East correspondent. In the late 1980s, he started ghosting a syndicated column for United Features Syndicate and went on to work for the National Wildlife Federation as media director. He lives in Tucson, Arizona.