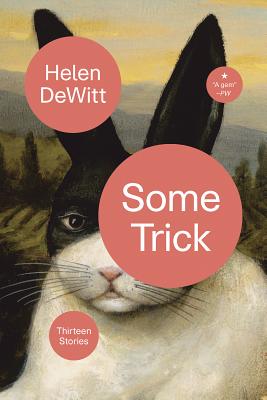 Hailed a “Best Book of the Year” by NPR, Publishers Weekly, Vulture, and the New York Public Library, Some Trick is now in paperback

Finalist for the Saroyan Prize for Fiction

For sheer unpredictable brilliance, Gogol may come to mind, but no author alive today takes a reader as far as Helen DeWitt into the funniest, most far-reaching dimensions of possibility. Her jumping-off points might be statistics, romance, the art world’s piranha tank, games of chance and games of skill, the travails of publishing, or success. “Look,” a character begins to explain, laying out some gambit reasonably enough, even in the face of situations spinning out to their utmost logical extremes, where things prove “more complicated than they had first appeared” and “at 3 a.m. the circumstances seem to attenuate.” In various ways, each tale carries DeWitt’s signature poker-face lament regarding the near-impossibility of the life of the mind when one is made to pay to have the time for it, in a world so sadly “taken up with all sorts of paraphernalia superfluous, not to say impedimental, to ratiocination.”

Helen DeWitt was born in a suburb of Washington, DC. Daughter of American diplomats, she grew up mainly in Latin America, living in Mexico, Brazil, Colombia, and Ecuador. She went to Oxford to study classics for a BA and D.Phil. She left academia to try to write a novel, moving eventually to London and acquiring UK citizenship. She had some 100 fragments of novels when she began work in 1995 on the novel that was published as The Last Samurai in 2000. The book caused a sensation at the Frankfurt Bookfair 1999, going on to be translated in 20 languages (DeWitt reads some 15 languages to various degrees of fluency). On the reissue of The Last Samurai by New Directions in 2016 it was hailed by Vulture Magazine as The Best Book of the Century. She is also the author of Lightning Rods, a Mel Brooksian satire on sexual harassment, and Some Trick, a collection of stories. She has been based in Berlin since 2004, but also spends time at a cottage in the woods of Vermont improving her chainsaw skills.

DeWitt certainly has some more tricks up her sleeve.
— Chicago Review

Brilliant and inimitable Helen DeWitt: patron saint of anyone in the world who has to deal with the crap of those in power who do a terrible job with their power, and who make those who are under their power utterly miserable.
— Sheila Heti - Electric Literature

I like dry humor with a stick of dynamite strapped to it. The forthcoming collection Some Trick by Helen DeWitt, is probably the most recent example.

A gem: one of fiction’s greatest minds—dazzling.
— Publishers Weekly

One definition of a genius is that she is so dissatisfied with the way the world is that she compels it to adjust to her, rather than following the usual course of adjusting to it. How do you get a complacent world to stop talking and pay attention? Some Trick suggests that the answer involves stubbornness, oddity, and a great deal of talent.
— Adam Kirsch - The Atlantic