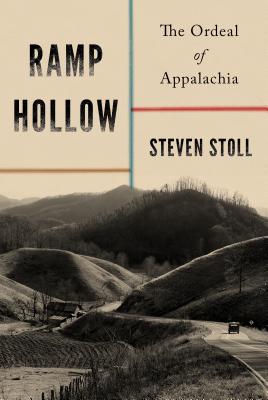 In Ramp Hollow, Steven Stoll offers a fresh, provocative account of Appalachia, and why it matters. He begins with the earliest European settlers, whose desire for vast forests to hunt in was frustrated by absentee owners—including George Washington and other founders—who laid claim to the region. Even as Daniel Boone became famous as a backwoods hunter and guide, the economy he represented was already in peril. Within just a few decades, Appalachian hunters and farmers went from pioneers to pariahs, from heroes to hillbillies, in the national imagination, and the area was locked into an enduring association with poverty and backwardness. Stoll traces these developments with empathy and precision, examining crucial episodes such as the Whiskey Rebellion, the founding of West Virginia, and the arrival of timber and coal companies that set off a devastating “scramble for Appalachia.”

At the center of Ramp Hollow is Stoll’s sensitive portrayal of Appalachian homesteads. Perched upon ridges and tucked into hollows, they combined small-scale farming and gardening with expansive foraging and hunting, along with distilling and trading, to achieve self-sufficiency and resist the dependence on cash and credit arising elsewhere in the United States. But the industrialization of the mountains shattered the ecological balance that sustained the households. Ramp Hollow recasts the story of Appalachia as a complex struggle between mountaineers and profit-seeking forces from outside the region. Drawing powerful connections between Appalachia and other agrarian societies around the world, Stoll demonstrates the vitality of a peasant way of life that mixes farming with commerce but is not dominated by a market mind-set. His original investigation, ranging widely from history to literature, art, and economics, questions our assumptions about progress and development, and exposes the devastating legacy of dispossession and its repercussions today.

Steven Stoll studies the ways that people think about resources, capital, and how the economy of exchange functions within the larger economy of Earth. He is an environmental historian, but his work is related to geography, social ecology, and the political theory of the seventeenth, eighteenth, and nineteenth centuries. Most of Stoll's writing concerns agrarian society in the United States. He is the author of U.S. Environmentalism Since 1945 and The Great Delusion: A Mad Inventor, Death in the Tropics, and the Utopian Origins of Economic Growth. Stoll is a regular contributor to Harper's Magazine and teaches history at Fordham University.

"The book is a masterpiece of panoramic history." —Peter Lewis, Minneapolis Star Tribune

"Mr. Stoll, a history professor at Fordham University, marshals his extensive knowledge of ancient and modern economic systems to present a compelling and persuasive argument . . . “Ramp Hollow” adds an eerie sense of déjà vu to the present-day arguments over what, if any, benefits Appalachian communities are reaping from Marcellus shale drilling." —Steve Halvonik, Pittsburgh Post-Gazette

"Meticulously researched . . . Those who associate 'academic' with 'dry' will be pleasantly surprised: the book's prose is light and readable . . . The book's great strength is that it acknowledges something our politics often fails to: that not everyone wants the same things or possesses the same preferences . . . Challenging, interesting and engrossing." —J.D. Vance, The New York Times Book Review

"Stunning . . . Everything the real hillbillies wanted [J.D]. Vance to acknowledge is laid out majestically . . . Ramp Hollow offers a granular chronicle of how wealth, poverty and inequality accrete, layer upon generational layer . . . [It] should be read . . . for the compassion and historical attention that Mr. Stoll devotes to this long-maligned region . . ." —Beth Macy, The Wall Street Journal

"Powerful and outrage-making . . . Gravid and well made . . . A painstaking history of how public land became real estate . . . Stoll clings to a history of what the United States could be. His book becomes a withering indictment of rapacious capitalism." —Dwight Garner, The New York Times

"A searching economic and political history . . . Stoll's sharp book complicates our understanding of a much-misunderstood, much-maligned region that deserves better than it has received." —Kirkus Reviews

"Stoll identifies [Appalachian poverty], correctly, as a consequence of dispossession. By giving it a distinct pedigree, he helps readers understand why Appalachia became poor and why it has stayed that way for so long . . . He is an appealing writer . . . Stoll's insights on how Appalachia became what it is today are an important corrective to flawed commentary about a much-maligned place." —Sarah Jones, Publishers Weekly

"In Ramp Hollow, Steven Stoll has written both a scholarly masterpiece about the history of dispossessed men and women and a profoundly humane critique of capitalism in the present as well as the past. Anyone who reads this book will never think about the people who live in 'coal country' the same way again." —Michael Kazin, author of War Against War: The American Fight for Peace, 1914–1918 and editor of Dissent

"A deep and moving chronicle of dispossession, Steven Stoll's Ramp Hollow manages, like no other account I have seen, to combine a subtle understanding of Appalachian subsistence practices with a global understanding of the importance of the commons. Erudite, conceptually powerful, magnificently documented, and deeply sympathetic, Ramp Hollow is an instant classic of agrarian history." —James C. Scott, Sterling Professor of Political Science and Professor of Anthropology, Yale University

"Ramp Hollow is a bold, imaginative, and eminently readable book that opens up vital questions about how we think about the history of alternatives within a dominant capitalist social order. Anchored in the lives of Appalachian farmers, it has enormous sweep, making telling observations about patterns of subsistence farming and dispossession around the world. One can see Steven Stoll drawing on his enormous wealth of knowledge about farming and rural life, and his voice is always direct and compelling. I think it is an extraordinary achievement." —Elizabeth Blackmar, Professor of History, Columbia University

"Steven Stoll's book will be powerfully influential. He begins in the hollows and follows the trail to global insights. We're deep in the dirt, then deep into texts. It's a difficult feat to pull off, but he accomplishes it in a way that is not only enlightening but glorious." —John Mack Faragher, Howard R. Lamar Professor of History and American Studies, Yale University

"In this sweeping, provocative study, Steven Stoll comes to the defense of American pioneers and smallholders everywhere. Focusing on the mountaineers of West Virginia, Stoll argues that a largely successful household mode of production, connected to a larger ecological commons, was not isolated and backwards until it was impoverished by industrial invasion. He ties the undermining of Appalachia highlanders back to the enclosing of early-modern Britain, and to the continuing dispossession of African smallholders today." —Brian Donahue, Brandeis University