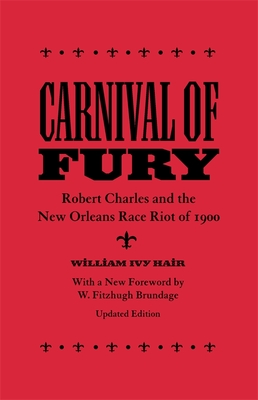 One July week in 1900 an obscure black laborer named Robert Charles drew national headlines when he shot twenty-seven whites--including seven policemen--in a series of encounters with the New Orleans police. An avid supporter of black emigration, Charles believed it foolish to rely on southern whites to uphold the law or to acknowledge even minimal human rights for blacks. He therefore systematically armed himself, manufacturing round after round of his own ammunition before undertaking his intentionally symbolic act of violent resistance. After the shootings, Charles became an instant hero among some blacks, but to most people he remained a mysterious and sinister figure who had promoted a "back-to-Africa" movement. Few knew anything about his early life. This biography of Charles follows him from childhood in a Mississippi sharecropper's cabin to his violent death on New Orleans's Saratoga Street. With the few clues available, William Ivy Hair has pieced together the story of a man whose life spanned the thirty-four years from emancipation to 1900--a man who tried to achieve dignity and self-respect in a time when people of his race could not exhibit such characteristics without fear of reprisal. Hair skillfully penetrates the world of Robert Charles, the communities in which he lived, and the daily lives of dozens of people, white and black, who were involved in his experience. A new foreword by W. Fitzhugh Brundage sets this unique and innovative biography in the context of its time and demonstrates its relevance today.

William Ivy Hair (1930-1992) was Fuller E. Callaway Professor of Southern History at Georgia College in Milledgeville, Georgia. He is the author of several books, including The Kingfish and His Realm: The Life and Times of Huey P. Long and Bourbonism and Agrarian Protest: Louisiana Politics, 1877-1900. W. Fitzhugh Brundage is a William B. Umstead Professor of History at the University of North Carolina-Chapel Hill. He is the author of A Socialist Utopia in the New South: The Ruskin Colonies in Tennessee and Georgia, 1894-1901 and Lynching in the New South: Georgia and Virginia, 1880-1930.