Rise of the King (The Legend of Drizzt #29) (Mass Market) 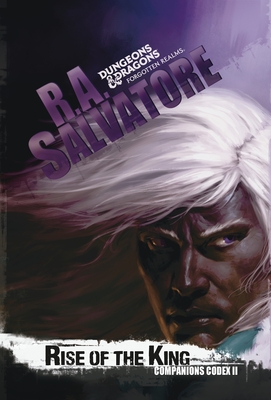 This is book number 29 in the The Legend of Drizzt series.

In the chaotic aftermath of the Sundering, the orcs of Many-Arrows reignite their bloody feud with Bruenor Battlehammer

Having escaped Gauntlgrym, the Companions of the Hall are united in body and spirt—but not in ideals. As the Darkening casts its shadows upon the northern cities of the Shining White, portending war, the past rears its angry head. Old debts insist on payment and old wrongs demand to be set right. The bloody dwarf-orc feud reignites with disastrous consequences.

When drow Quenthel Baenre urges the orcs into war, a new and bloodthirsty king takes the throne of Many-Arrows. The savage orc hordes gather under his command, bringing an end to the decades of peace in the North. Dwarf steel meets ancient enemies, painting the Spine of the World in red.

In the middle of this chaos, the Companions march onwards—to rescue Pwent from his vampiric curse and to reclaim Bruenor’s throne; to combat the treachery of the black-souled drow and to defeat the orcs. As the world repeats a deadly cycle of violence and hate, Drizzt Do’Urden is forced into a fight for his life, his loved ones, and his very soul.

Rise of the King is the second book in the Companions Codex and the twenty-ninth book in the Legend of Drizzt series.