The Winds of Dune: Book Two of the Heroes of Dune (Mass Market) 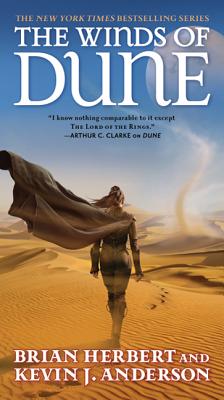 This is book number 7 in the Dune series.

Paul has walked off into the sand, blind, and is presumed dead. Jessica and Gurney are on Caladan; Alia is trying to hold the Imperial government together with Duncan; Mohiam dead at the hands of Stilgar; Irulan imprisoned. Paul's former friend, Bronso of Ix, now seems to be leading opposition to the House of Atreides. Herbert and Anderson's newest book in this landmark series will concentrate on these characters as well the growing battle between Jessica, and her daughter, Alia.

Brian Herbert, son of Frank Herbert, wrote the definitive biography of his father, Dreamer of Dune, which was a Hugo Award finalist. Brian is president of the company managing the legacy of Frank Herbert and is an executive producer of the motion picture Dune, as well as of the TV series Dune: The Sisterhood. He is the author or coauthor of more than forty-five books, including multiple New York Times bestsellers, has been nominated for the Nebula Award, and is always working on several projects at once. He and his wife, Jan, have traveled to all seven continents, and in 2019, they took a trip to Budapest to observe the filming of Dune.

Kevin J. Anderson has written dozens of national bestsellers and has been nominated for the Hugo Award, the Nebula Award, the Bram Stoker Award, and the SFX Readers' Choice Award. His critically acclaimed original novels include the ambitious space opera series The Saga of Seven Suns, including The Dark Between the Stars, as well as Wake the Dragon epic fantasy trilogy, the Terra Incognita fantasy epic with its two accompanying rock CDs. He also set the Guinness-certified world record for the largest single-author book signing, and was recently inducted into the Colorado Authors’ Hall of Fame.

“Fill[s] in the gaps between the late Frank Herbert's classic Dune and its sequels Dune Messiah and Children of Dune. . . . This sequel to Paul of Dune is an important addition to the Dune chronology and will be in demand by Herbert fans.” —Booklist

“Unquestionably, Herbert & Anderson can spin a great yarn; while technically producing a vivid, mystifying universe, filled with characters that are both endearing, and loathsome. I recommend this one highly, but be warned, if this is the first Dune book you are reading, get ready to hit the bookstore, because I promise you, it will not be the last!” —BookSpotCentral

“The Winds of Dune is filled with the same psychological complexities that were a hallmark of Frank Herbert's books. It twists and turns on matters of trust, loyalty and the meaning of honor. Familiar characters are brought back to life with poignant clarity and the suspense and tension never let up. Even knowing what comes next in Children of Dune, I was hooked by this tale and enjoyed it immensely. It is a worthy addition to the Dune saga.” —IN Denver Times

“This vital link between the first two books of the Dune saga begins immediately after the close of Dune. . . . This is good reading. . . . Standing well enough on its own for Dune novices, it goes without saying that it's must reading for established fans.” —Booklist on Paul of Dune

“Drawing on Frank Herbert's massive body of notes, the coauthors of the new Dune series continue their expansion and illumination of the unexplored pieces of one of the genre's most significant and powerful stories. A priority purchase for libraries of all sizes. Highly recommended.” —Library Journal (stared review) on Paul of Dune

“One of the monuments of modern science fiction.” —The Chicago Tribune on Dune

“I know nothing comparable to it except The Lord of the Rings.” —Sir Arthur C. Clarke on Dune

“A portrayal of an alien society more complete and deeply detailed than any other author in the field has managed . . . a story absorbing equally for its action and philosophical vistas. . . . An astonishing science fiction phenomenon.” —The Washington Post on Dune

“Powerful, convincing, and most ingenious.” —Robert A. Heinlein on Dune

“Herbert's creation of this universe, with its intricate development and analysis of ecology, religion, politics, and philosophy, remains one of the supreme and seminal achievements in science fiction.” —Louisville Times on Dune