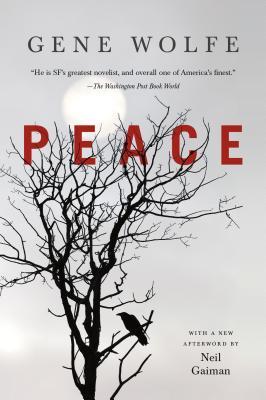 Hailed as "one of the literary giants of SF" by the Denver Post, Gene Wolfe has repeatedly won the field's highest honors, including the Nebula, the Hugo, and the World Fantasy awards.

Peace is Gene Wolfe's first full-length novel, a work that shows the genius that later flourished in such acclaimed works as The Fifth Head of Cerberus and The Book of The New Sun.

Originally published in 1975, Peace is a spellbinding, brilliant tour de force of the imagination. The melancholy memoir of Alden Dennis Weer, an embittered old man living out his last days in a small midwestern town, the novel reveals a miraculous dimension as the narrative unfolds. For Weer's imagination has the power to obliterate time and reshape reality, transcending even death itself. Powerfully moving and uncompromisingly honest, Peace ranks alongside the finest literary works of our time.

“A tricky, evil, deep, and remarkable novel by one of America's finest writers.... It is not merely one of my favorite books (although it is certainly that); it is one of a tiny handful of modern novels of which I am in awe.” —Neil Gaiman, author of SANDMAN

“This delicate, insubstantial web of Alden Dennis Weer's memoirs acquires a solidity and a timelessness which may well make it one of Wolfe's most remarkable works.” —SF Site

“[Gene Wolfe's] first fantasy novel, Peace, may be his finest.” —The Encyclopedia of Fantasy

“Gene Wolfe is the finest writer the science fiction world has yet produced.” —The Washington Post on Gene Wolfe

“Gene Wolfe is unique. If there were forty or fifty of this first-rate author—no, let’s be reasonable and ask Higher Authorities for only four or five—American literature as a whole would be enormously enriched.” —Chicago Sun-Times