Because of Winn-Dixie (Paperback) 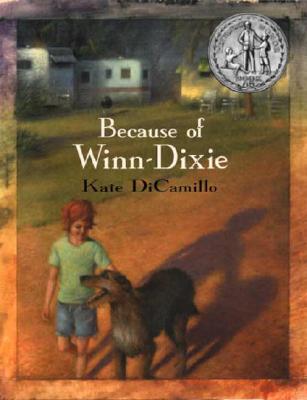 By Kate Dicamillo
$5.99
Email or call for price.

Funny and poignant, this 2001 Newbery Honor novel captures life in a quirky Southern town as Opal and her mangy dog, Winn-Dixie, strike up friendships among the locals. (Ages 8 and up)

The summer Opal and her father, the preacher, move to Naomi, Florida, Opal goes into the Winn-Dixie supermarket—and comes out with a dog. A big, ugly, suffering dog with a sterling sense of humor. A dog she dubs Winn-Dixie. Because of Winn-Dixie, the preacher tells Opal ten things about her absent mother, one for each year Opal has been alive. Winn-Dixie is better at making friends than anyone Opal has ever known, and together they meet the local librarian, Miss Franny Block, who once fought off a bear with a copy of WAR AND PEACE. They meet Gloria Dump, who is nearly blind but sees with her heart, and Otis, an ex-con who sets the animals in his pet shop loose after hours, then lulls them with his guitar.

Opal spends all that sweet summer collecting stories about her new friends and thinking about her mother. But because of Winn-Dixie or perhaps because she has grown, Opal learns to let go, just a little, and that friendship—and forgiveness—can sneak up on you like a sudden summer storm.

Recalling the fiction of Harper Lee and Carson McCullers, here is a funny, poignant, and utterly genuine first novel from a major new talent.

Kate DiCamillo says of writing BECAUSE OF WINN-DIXIE, "I was living in an apartment where no dogs were allowed. As a result, I was suffering from a serious case of 'dog withdrawal.' One night, before I went to sleep, I heard this little girl's voice (with a Southern accent) say, 'I have a dog named Winn-Dixie.' When I woke up the next morning, the voice was still talking, and I started writing down what India Opal Buloni was telling me. The book is (I hope) a hymn of praise to dogs, friendship, and the South."

Kirkus Reviews, starred review
09/06/2000
"Brush strokes of magical realism elevate this beyond a simple story of friendship to a well-crafted tale of community and fellowship, of sweetness, sorrow, and hope. And it's funny, too. A real gem." --------

Publishers Weekly, starred review
09/06/2000 "...
[E]xquisitely crafted first novel. Each chapter possesses an arc of its own and reads almost like a short story in its completeness; yet the chapters add up to much more than a sum of their parts. . . This bittersweet tale of contemporary life in a small Southern town will hold readers rapt." --------

School Library Journal, starred review
09/06/2000
"This well-crafted, realistic, and heartwarming story will be read and reread as a new favorite deserving a long-term place on library shelves." --------

School Library Journal Best Books of the Year
12/01/2000
Selected titles were chosen by the editors based on the following criteria: strength of story line, clarity or presentation, quality of illustration, and estimated appeal to children or adolescents. "A heartfelt story that is sure to touch a chord with readers." --------

Horn Book Guide, The
06/01/2000
"A gentle book about good people coming together to combat lonliness and heartache--with a little canine assistance." --------

Five Owls, Book of Merit
11/01/2000
"Children will enjoy Opal's abiding humor and Winn-Dixie's disarming and endearing ways, and the funny and important things that happen when the two of them get together." --------

Book Links
09/01/2002
"In this Newbery Honor Book, the author skillfully weaves a variety of characters together to show the meaning of friendship." --------

Newsday
02/17/2005 .
"The books' truthfulness is what makes it so powerful. People can identify with the fact that everyone sort of isolates themselves because of a misconnection or a loss or whatever is in their lives." --------