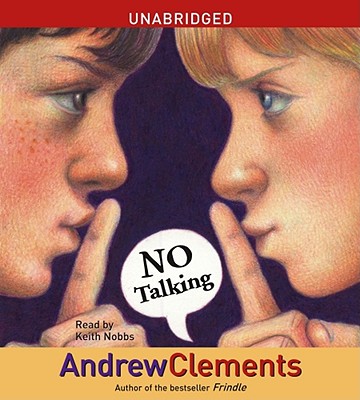 It’s boys vs. girls when the noisiest, most talkative, and most competitive fifth graders in history challenge one another to see who can go longer without talking. Teachers and school administrators are in an uproar, until an innovative teacher sees how the kids’ experiment can provide a terrific and unique lesson in communication. In No Talking, Andrew Clements portrays a battle of wills between some spunky kids and a creative teacher with the perfect pitch for elementary school life that made Frindle an instant classic.

Andrew Clements (1949–2019) was the author of the enormously popular Frindle. More than 10 million copies of his books have been sold, and he was nominated for a multitude of state awards, including a Christopher Award and an Edgar Award. His popular works include About Average, Troublemaker, Extra Credit, Lost and Found, No Talking, Room One, Lunch Money, and more. He was also the author of the Benjamin Pratt & the Keepers of the School series. Find out more at AndrewClements.com.

"Andrew Clements set the standard for the school story in 1996 with his first novel, Frindle, which went on to sell more than two million copies...No Talking is Clements's best school story since." - The New York Times Book Review

"Readers may be compelled to use their voice to praise Clements's deft handling of an interesting premise." - Publishers Weekly

"A vintage tale from the master of the theme-driven, feel-good school story." - Kirkus Reviews, starred review