Too Late to Say Goodbye: A True Story of Murder and Betrayal (Mass Market) 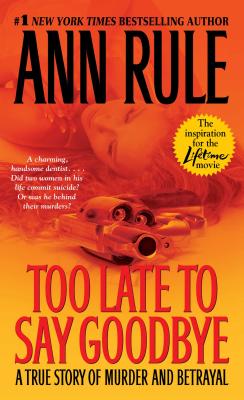 From bestselling author Ann Rule comes the engrossing true story of two beautiful, loving women, and their murder by the man in their life—handsome, charming, rich, a man marked for unlimited success—but one who would never allow any woman to leave him, no matter what the provocation.

Jenn Corbin, a lovely, slim, brown-eyed blonde, appeared to have it all: two dear little boys, a posh home in one of the upscale suburbs of Atlanta, expensive cars, a plush houseboat, and a husband—Dr. Bart Corbin, a successful dentist—who was tall, handsome, and brilliant.

But gradually their seemingly idyllic life together began to crumble. There was talk of seeing a marriage counselor. Bart was distraught; Jenn seemed disenchanted. She needed to reach out to someone she could confide in—beyond her mother and her sisters. Then, just a few weeks before Christmas 2004, Jenn was found dead with a bullet in her head, a revolver beside her. From the position of the body her death appeared to be a suicide. But Gwinnett County detective Marcus Head was not totally convinced, nor was Jenn's family, who could not believe she would take her own life.

And how was this death related to another apparent suicide fourteen years earlier—that of Dorothy "Dolly" Hearn, a spectacularly beautiful dental student? A star athlete and homecoming queen in high school, Dolly later dated Bart Corbin in dental school. Was there a connection, or was the answer to be found in a secret—even dangerous—relationship Jenn Corbin was having outside her marriage? For Too Late to Say Goodbye, Ann Rule has interviewed virtually everyone in any way related to the story—the victims' families, police investigators, prosecutors, and sources from Georgia to Australia—to uncover the truth behind the headlines of these two sensational deaths. What emerges is an incredible tale of jealous rage; of stunning circumstantial and physical evidence that runs from the steamy to the macabre to almost-unheard-of forensic techniques; and of a tragic irony—a fateful discovery that motivated the killing. The definitive unraveling of one of the strangest murder investigations of our time, Too Late to Say Goodbye is perhaps the finest achievement of a truly great writer's career.

Ann Rule wrote thirty-five New York Times bestsellers, all of them still in print. Her first bestseller was The Stranger Beside Me, about her personal relationship with infamous serial killer Ted Bundy. A former Seattle police officer, she used her firsthand expertise in all her books. For more than three decades, she was a powerful advocate for victims of violent crime. She lived near Seattle and died in 2015.