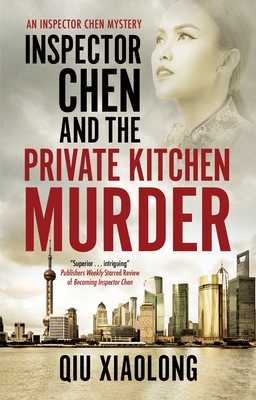 This is book number 12 in the Inspector Chen Mystery series.

Chen Cao has been removed from his chief inspector role, but that doesn't stop him investigating a 'private kitchen' murder that has similarities to a Judge Dee story. No longer a chief inspector, Chen Cao finds himself as director of the Shanghai Judicial System Reform Office. To outsiders it's a promotion, but Chen knows he's being removed from the spotlight as he's immediately placed on involuntary 'convalescence leave' to stop him interfering with any cases. However, with various high-profile crimes making headlines and fears escalating over vigilante reprisals, Chen's superiors know he must at least appear active. One case revolves around Min Lihau, a mingyuan, who runs a 'private kitchen' for powerful figures in Shanghai. Min's accused of murdering her assistant, yet Chen is struck by its similarities to a historic case involving the famous Judge Dee. When an acquaintance of his is murdered in connection with Min, Chen knows he can't stand idly by . . . but he must act in secret, under the cover of writing a Judge Dee novel.