One for the Money: A Stephanie Plum Novel (Hardcover) 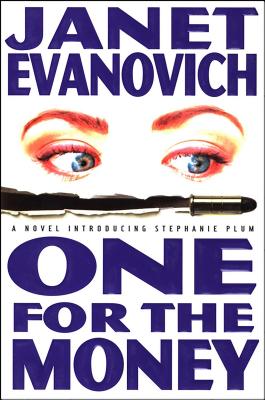 This is book number 1 in the Stephanie Plum series.

Meet Stephanie Plum, a bounty hunter with attitude. In Stephanie’s opinion, toxic waste, rabid drivers, armed schizophrenics, and August heat, humidity, and hydrocarbons are all part of the great adventure of living in Jersey.

She’s a product of the “burg,” a blue-collar pocket of Trenton where houses are attached and narrow, cars are American, windows are clean, and (God forbid you should be late) dinner is served at six.

Now Stephanie’s all grown up and out on her own, living five miles from Mom and Dad’s, doing her best to sever the world’s longest umbilical cord. Her mother is a meddler, and her grandmother is a few cans short of a case.

One for the Money is now a major motion picture starring Katherine Heigl as Stephanie Plum and Debbie Reynolds as Grandma Mazur.

Senator William S. Cohen author of Murder in the Senate A fast-paced, gritty mystery....Janet Evanovich is a witty and clever voice in crime fiction.

Joan Hess author of the Claire Malloy and the Maggody series This is one gritty romp, to put it mildly. Stephanie Plum has not only a hilarious family and some very peculiar associates, but also a wicked sense of humor, a healthy libido, and the tenacity to tackle the most appalling thug to swagger down the streets of Trenton.

Judith Greber, a.k.a. Gillian Roberts author of the Amanda Pepper series With Stephanie Plum, New Jersey has struck gold. Janet Evanovich is a formidable writer who can turn even pollution into endearing local color -- and this is an outstanding debut. I can't wait for the sequel.

Marlys Millhiser author of Death of the Office Witch Finally, something fresh and different! Stephanie Plum is an original and One for the Money is a great series debut.

Deborah Crombie author of All Shall Be Well What a great read! I couldn't put it down. It's fast and funny...Stephanie Plum's attitude is as refreshing as a cold wind on a blistering New Jersey day. She's a believably vulnerable heroine who doesn't need to be rescued by a man, even one as sexy as Joe Morelli.

Dean James manager, Murder by the Book, Houston, and coauthor of By a Woman's Hand Evanovich has a smooth, funny style, spacing thrills and laughs for maximum effect. Mark Evanovich and Plum down on your must-read list!

Jerome Doolittle author of Headlock Funny, unsentimental, tough and touching all at once. I hope we see a lot more of Stephanie Plum.