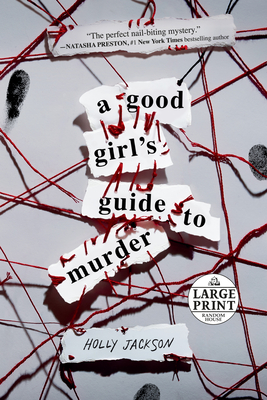 “Brave and smart Pippa loves to search, pry, and dig into information. At the moment, she is looking into the murder/disappearance of Andie Bell while also trying to prove that Sal Singh, who confessed before completing suicide, is innocent. From the log entries and diagrams of Pippa’s capstone project to terrific characterization and a fulfilling ending, this book features great storytelling. Highly recommended for people who liked One of Us Is Lying!”
— Megan Fortas, Novel., Memphis, TN

THE NEW YORK TIMES BESTSELLING SERIES WITH OVER ONE MILLION COPIES SOLD• Everyone is talking about this addictive must-read mystery with shades of Serial and Making a Murderer about an investigation turned obsession, full of twists and turns and with an ending you'll never expect.

Everyone in Fairview knows the story.

Pretty and popular high school senior Andie Bell was murdered by her boyfriend, Sal Singh, who then killed himself. It was all anyone could talk about. And five years later, Pip sees how the tragedy still haunts her town.

But she can't shake the feeling that there was more to what happened that day. She knew Sal when she was a child, and he was always so kind to her. How could he possibly have been a killer?

Now a senior herself, Pip decides to reexamine the closed case for her final project, at first just to cast doubt on the original investigation. But soon she discovers a trail of dark secrets that might actually prove Sal innocent . . . and the line between past and present begins to blur. Someone in Fairview doesn't want Pip digging around for answers, and now her own life might be in danger.

Holly Jackson is the #1 New York Times bestselling author of the A Good Girl's Guide to Murder series. She started writing stories at a young age, completing her first (poor) attempt at a novel when she was fifteen. Holly graduated from the University of Nottingham, where she studied literary linguistics and creative writing, with a master's degree in English. She enjoys playing video games and watching true-crime documentaries so she can pretend to be a detective. She lives in London.
Follow Holly on Twitter and Instagram at @HoJay92.

"The book pulled me into it so hard that I forgot everything going on around me, I just needed to solve the murder with Pip."—PopSugar

"This is a great, twisty read for fans of YA." —Book Riot

“A fun, gripping, and skillfully constructed novel of suspense. I loved Pip—her relatable quirks, her inventive investigative approach, and her willingness to step outside of her safe world in search of the truth.” —Emily Arsenault, author of All the Pretty Things

"So so clever." —Savannah Brown, author of The Truth About Keeping Secrets


“Well-executed…. A treat for mystery readers who enjoy being kept in suspense.” —Kirkus Reviews

"Legions of fans of true crime podcasts may therefore flock to this one, and they’re unlikely to be disappointed." —Bulletin

"Fans of true crime will be hooked by the hunt for a killer, but there’s more to this Guide than just a whodunit. It’s a story of families, community and the ways a crisis can turn them against one another in the blink of an eye." —BookPage