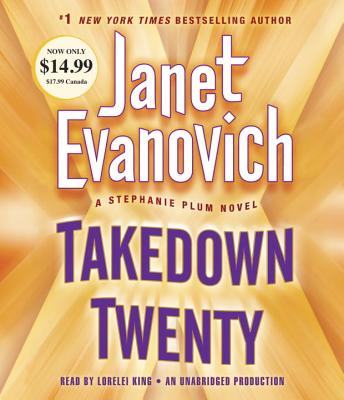 This is book number 20 in the Stephanie Plum series.

Stephanie Plum has her sights set on catching a notorious mob boss. If she doesn’t take him down, he may take her out.

New Jersey bounty hunter Stephanie Plum knows better than to mess with family. But when powerful mobster Salvatore “Uncle Sunny” Sunucchi goes on the lam in Trenton, it’s up to Stephanie to find him. Uncle Sunny is charged with murder for running over a guy (twice), and nobody wants to turn him in—not his poker buddies, not his bimbo girlfriend, not his two right-hand men, Shorty and Moe. Even Trenton’s hottest cop, Joe Morelli, has skin in the game, because—just Stephanie’s luck—the godfather is his actual godfather. And while Morelli understands that the law is the law, his old-world grandmother, Bella, is doing everything she can to throw Stephanie off the trail.

It’s not just Uncle Sunny giving Stephanie the run-around. Security specialist Ranger needs her help to solve the bizarre death of a top client’s mother, a woman who happened to play bingo with Stephanie’s Grandma Mazur. Before Stephanie knows it, she’s working side by side with Ranger and Grandma at the senior center, trying to catch a killer on the loose—and the bingo balls are not rolling in their favor.

With bullet holes in her car, henchmen on her tail, and a giraffe named Kevin running wild in the streets of Trenton, Stephanie will have to up her game for the ultimate takedown.

Janet Evanovich is the #1 New York Times bestselling author of the Stephanie Plum series, the Fox and O’Hare series, the Lizzy and Diesel series, the Knight and Moon series, the Alexandra Barnaby novels and Troublemaker graphic novel, and How I Write: Secrets of a Bestselling Author.

Lorelei King is an actress and a multi-award-winning narrator who has recorded more than 200 audiobooks. Her film credits include Notting Hill, The Saint, and House of Mirth. She has played regular and recurring characters in such British television shows as Chef, Cold Feet, and Emmerdale.