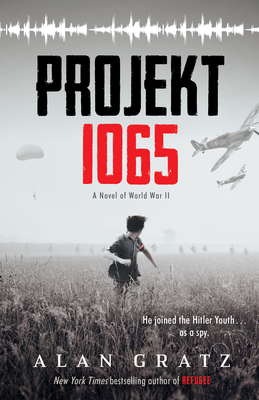 Award-winning, critically acclaimed author Alan Gratz (Prisoner B-3087) returns with another gripping World War II story, this time about a spy in the Hitler Youth.
Infiltrate. Befriend. Sabotage.
World War II is raging. Michael O'Shaunessey, originally from Ireland, now lives in Nazi Germany with his parents. Like the other boys in his school, Michael is a member of the Hitler Youth.

But Michael has a secret. He and his parents are spies.

Michael despises everything the Nazis stand for. But he joins in the Hitler Youth's horrific games and book burnings, playing the part so he can gain insider knowledge.

When Michael learns about Projekt 1065, a secret Nazi war mission, things get even more complicated. He must prove his loyalty to the Hitler Youth at all costs -- even if it means risking everything he cares about.

Including... his own life.

From acclaimed author Alan Gratz (Prisoner B-3087) comes a pulse-pounding novel about facing fears and fighting for what matters most.

Alan Gratz is the New York Times bestselling author of several books for young readers, including Grenade; Refugee; Projekt 1065, a Kirkus Reviews Best Book of 2016; Prisoner B-3087, a Junior Library Guild selection that was named to YALSA's 2014 Best Fiction for Young Adults list; and Code of Honor, a YALSA 2016 Quick Pick. Alan lives in North Carolina with his wife and daughter. Look for him online at alangratz.com.

* "While the book is replete with fascinating historical insight, Gratz has also crafted a suspenseful mystery that will keep readers on the edge of their seats. With short, action-packed chapters, it is a great choice for reluctant readers as well... A winning combination of action, suspense, and historical setting." -- School Library Journal, starred review

"A bone-chilling tale not to be ignored." -- Kirkus Reviews

"Gratz ably conveys... fatalism, yearning, and determination in the face of the unimaginable." -- Publishers Weekly

"Heartbreaking, gripping, raw, and emotional... storytelling at its finest." -- VOYA

Praise for Code of Honor:

"Readers will be swept up by both the intrigue and the rapid pacing... Kamran is a smart and sympathetic narrator, and readers will be happy to spend time with him in this action-packed thriller." -- Kirkus Reviews

"Exciting, at times ripped from the headlines, and scary, this cinematic work has layers of intrigue and danger in each scene... will appeal to a variety of readers and will raise questions about patriotism, loyalty, and trust... A winner." -- School Library Journal

"Vivid characters and timely topics, such as posttraumatic stress disorder, contribute to making Code of Honor a first-rate novel." -- VOYA