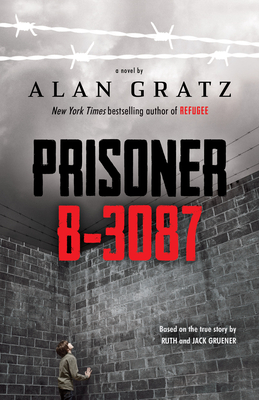 Survive. At any cost.
10 concentration camps.

10 different places where you are starved, tortured, and worked mercilessly.

It's something no one could imagine surviving.

But it is what Yanek Gruener has to face.

As a Jewish boy in 1930s Poland, Yanek is at the mercy of the Nazis who have taken over. Everything he has, and everyone he loves, have been snatched brutally from him. And then Yanek himself is taken prisoner -- his arm tattooed with the words PRISONER B-3087.

He is forced from one nightmarish concentration camp to another, as World War II rages all around him. He encounters evil he could have never imagined, but also sees surprising glimpses of hope amid the horror. He just barely escapes death, only to confront it again seconds later.

Can Yanek make it through the terror without losing his hope, his will -- and, most of all, his sense of who he really is inside?


Based on an astonishing true story.

Alan Gratz is the New York Times bestselling author of several books for young readers, including Grenade; Refugee; Projekt 1065, a Kirkus Reviews Best Book of 2016; Prisoner B-3087, a Junior Library Guild selection that was named to YALSA's 2014 Best Fiction for Young Adults list; and Code of Honor, a YALSA 2016 Quick Pick. Alan lives in North Carolina with his wife and daughter. Look for him online at alangratz.com.

Ruth Gruener was born Aurelia Gamser in 1930s Poland. Ruth and her parents survived the Holocaust by hiding in the homes of gentile families. After World War II was over, Ruth and her family moved to the United States, where Ruth tried to start an ordinary teenage life in Brooklyn. Ruth married Jack Gruener, another Holocaust survivor, with whom she lived in Brooklyn until Jack's passing in 2017. They have two children and four grandchildren. Ruth works as a docent at the Museum of Jewish Heritage in downtown Manhattan and travels all over the country to speak to schools about her and Jack's experiences in the Holocaust.

"A bone-chilling tale not to be ignored." -- Kirkus Reviews

"Gratz ably conveys . . . fatalism, yearning, and determination in the face of the unimaginable." -- Publishers Weekly

"Heartbreaking, gripping, raw, and emotional . . . storytelling at its finest." -- VOYA