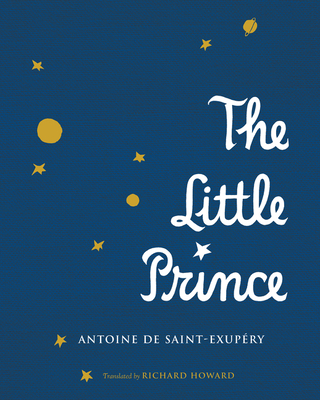 "One sees clearly only with the heart. Anything essential is invisible to the eyes."

The story of a stranded pilot, an extraordinary little boy, and their remarkable friendship, The Little Prince has become a cherished fable for generations of readers. As enchanting as it is wise, this beloved classic captures the mysteries of the heart and opens us to the meaning of life and the magic of love.

ANTOINE DE SAINT-EXUPÉRY, the "Winged Poet," was born in Lyon, France, in 1900. A pilot at twenty-six, he was a pioneer of commercial aviation and flew in the Spanish Civil War and World War II. His writings include The Little Prince, Wind, Sand and Stars, Night Flight, Southern Mail, and Airman's Odyssey. In 1944, while flying a reconnaissance mission for his French air squadron, he disappeared over the Mediterranean.

Richard Howard is the author of eleven books of poetry, including Untitled Subjects, which won the Pulitzer Prize in 1970, and Trappings. He is the translator of more than 150 works from the French and lives in New York City.

The Little Prince "A lovely story...which covers a poetic, yearning philosophy—not the sort of fable that can be tacked down neatly at its four corners but rather reflections on what are real matters of consequence." —The New York Times Book Review "Saint-Exupéry's most famous work -- a gentle fable of love and peace -- contains a thoughtful assessment of the details of its composition...[T]he special allure of the work is still the naively sophisticated, heartwarming tale of the little prince and his small planet." —Horn Book “This new translation into 'modern' English brings a classic tale into sharper focus for today's teens without sacrificing the beauty and simplicity of the author's writing, and the 'restored' artwork has all the charm of the original drawings. What appears to be a simple tale of two lost souls-one, a pilot marooned in the desert next to his ditched plane; the other, a minuscule prince in self-imposed exile from an asteroid so small that he can watch the sunset 44 times a day-reveals itself as something far more complex. What appears to be a fairy tale for children opens like the petals of the Little Prince's flower into a fantasy that has lessons for all of us.” —School Library Journal “Always welcome is that charming visitor from another planet, Antoine de Saint-Exupery's The Little Prince...The fable remains as lyrically haunting as ever.” —Publishers Weekly