Our Lady of Perpetual Hunger: A Memoir (Paperback) 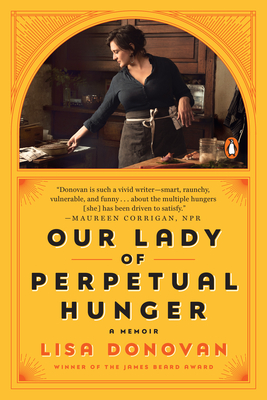 Named a Favorite Book for Southerners in 2020 by Garden & Gun

"Donovan is such a vivid writer—smart, raunchy, vulnerable and funny— that if her vaunted caramel cakes and sugar pies are half as good as her prose, well, I'd be open to even giving that signature buttermilk whipped cream she tops her desserts with a try.”—Maureen Corrigan, NPR

Noted chef and James Beard Award-winning essayist Lisa Donovan helped establish some of the South's most important kitchens, and her pastry work is at the forefront of a resurgence in traditional desserts. Yet Donovan struggled to make a living in an industry where male chefs built successful careers on the stories, recipes, and culinary heritage passed down from generations of female cooks and cooks of color. At one of her career peaks, she made the perfect dessert at a celebration for food-world goddess Diana Kennedy. When Kennedy asked why she had not heard of her, Donovan said she did not know. "I do," Kennedy said, "Stop letting men tell your story."

OUR LADY OF PERPETUAL HUNGER is Donovan's searing, beautiful, and searching chronicle of reclaiming her own story and the narrative of the women who came before her. Her family's matriarchs found strength and passion through food, and they inspired Donovan's accomplished career. Donovan's love language is hospitality, and she wants to welcome everyone to the table of good food and fairness.

Donovan herself had been told at every juncture that she wasn't enough: she came from a struggling southern family that felt ashamed of its own mixed race heritage and whose elders diminished their women. She survived abuse and assault as a young mother. But Donovan's salvations were food, self-reliance, and the network of women in food who stood by her.

In the school of the late John Egerton, OUR LADY OF PERPETUAL HUNGER is an unforgettable Southern journey of class, gender, and race as told at table.

Lisa Donovan has redefined what it means to be a "southern baker" as the pastry chef to some of the South's most influential chefs, including Margot McCormack, Tandy Wilson, and Sean Brock. Unabashedly serving her church cakes and pies to finish fine-dining experiences, she has been formative in establishing a technique-driven and historically rich narrative of southern pastry. Donovan received a James Beard Award for her writing in Food & Wine, where she is a regular contributor, and she has been a featured speaker at René Redzepi's globally renowned MAD Symposium. Our Lady of Perpetual Hunger is her first book.

“With anger, honesty, wit and passion...an impeccable blend of deadpan humor, candor and righteousness, Donovan critiques not only the rampant sexism in haute cuisine, but also the misogyny prevalent in our culture at large, not shying away from depicting her experiences of domestic partner abuse, rape and gender-based pay disparity...Assertive and empowering”—Kathleen Rooney, Star Tribune

“Donovan documents her struggles in a male-dominated field, her mixed-race heritage, her own experience with abuse and assault and how she put her life back together through the salvation of food."—Zibby Owens, Good Morning America

“Donovan’s story is that of a pastry chef working her way up in an often inhospitable industry, but it’s also about a woman creating her own narrative and grappling with the ways that the choices of the women who came before her—both personally and professionally—affect her life." —Eater

"Donovan . . . reveals the struggles and hard-fought lessons that have made her the courageous woman that she is today. . . . [W]ritten in a fierce and visceral style. . . . In a world that all too often credits male chefs for the culinary contributions of women and people of color, [Our Lady of Perpetual Hunger] is a valuable addition to the culinary memoir canon." —Booklist

"Donovan… chronicles her career as a chef and her unrelenting passion for the culinary arts, but she also digs into her family history, offering keen reflections on the intersections of race and gender and spirited discussions of work, class, and opportunity. . . .  [Our Lady of Perpetual Hunger] is not just a lively story of a talented pastry chef at the top of her game; it’s also a profoundly relatable memoir of the pervasive push back against female success. A fresh voice with a recipe for empowerment."— Kirkus

"[A] fiesty confessional. . . . Donovan’s candid, passionate memoir will resonate with anyone who has worked in professional kitchens, and particularly women."— Publishers Weekly

"Lisa Donovan’s writing has such intensity and assertiveness. It spikes the adrenaline and creates tension in a way that feels almost athletic. And it’s through this toned and visceral prose that we are forced to reckon with Lisa’s most essential recipe: that respect is bred from unflinching truth and raw honesty. In life, and on these pages, Lisa charts a path of personal growth with brave transparency, eloquently acknowledging that life’s greatest challenges are not circumstance, but a calling.”—Ashley Christensen, James Beard Award-winning chef

“The first time you meet Lisa you want to pull up a stool, pour a drink and listen to every story she has to tell. It turns out you don't need the stool or the drink. This is a woman you will be happy to get to know.” —Ruth Reichl, author of Save Me the Plums

“Lisa Donovan is one of the country's great pastry chefs, but this isn't a story about food, really. It's about the strength of womanhood and motherhood. It's about staring down the betrayals that women face. And it's about the redemptive power, not of food itself, but of finding common cause in feeding others.”—Francis Lam, host, The Splendid Table

“A critique of the 'world that men made,' a pledge to the women who came before her, and a challenge to work in new ways, Our Lady of Perpetual Hunger blazes a path of self-discovery that manages, as great memoir must, to serve readers more than self. Lisa Donovan knows things we need to know.” —John T. Edge, author of The Potlikker Papers

“In Our Lady of Perpetual Hunger, Lisa Donovan writes a line I kept returning to: 'I had vigor, the kind you could taste.' I could taste the writing in this book. Her breathless descriptors conjure heat and possibility, her incisive memories capture the dank and earthen bits. To give a book life, a wise writer understands her myths must die. This book's heart is its truth, one woman's unyielding look in the mirror and well beyond it. Lisa's ultimate embrace of the human who stares back at her is a kind of freedom for us all.” —Osayi Endolyn, James Beard Award-winning writer

"Yes, it's about love, family, food, and one woman's personal and professional journey. But more than all that, Our Lady of Perpetual Hunger is about life force, the unquenchable flame within us that demands to survive and thrive. It could only be written by Lisa Donovan, and it should be read by everyone.”  —Mary Laura Philpott, author of I Miss You When I Blink

"Lisa Donovan writes with a voice that is both bruised and tender in Our Lady of Perpetual Hunger. In tracing her path to food, Donovan honors the women who shaped her philosophy in the kitchen, reminding us of the necessity of women telling their stories in a world so eagerly determined to erase them. We are quite lucky to live in a world where Donovan has written her own story with such grace.” —Mayukh Sen, James Beard Award-winning writer